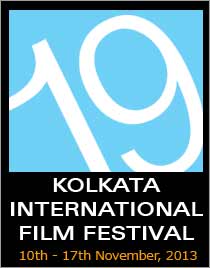 The eight-day-long carnival, featuring 189 films from 63 countries is likely to be an enriching experience for cinema connoisseurs.

KIFF's latest edition has gone digital through a mobile application providing detailed information about the screenings across 13 venues in the city.

Around 3,000 delegates and 24 international guests, including noted Israel filmmaker Amos Gitai will attend the film festival.

To make it an inclusive affair, shows via mobile vans have been organised in five different pockets of the city.

Rituparno Ghosh's film "Taak Jhaank'(Sunglass) will be premiered at KIFF.

A special tribute will be paid to the director by screening eight of his movies including "Unishe April", "Dahan", "The Last Lear" and "Chitrangada".

Marking 100 years of the Indian cinema, dancer Sukalyan Bhattacharya will showcase the evolution of cinema through his choreography at the opening ceremony, while actress Sharmila Tagore will deliver the Satyajit Ray Memorial lecture Nov 14.

Dadasaheb Phalke Awardee Malayalam filmmaker Adoor Gopalakrishnan's contributions will be highlighted through a retrospective segment showing nine of his films.

The fest will also honour the best film from the South Asian region with the Network for Promotion of Asian Cinema (NETPAC) award. Films from Indonesia, Singapore, Philippines, China, Malaysia, Myanmar and Thailand will vie for the award.

"There are seven films from south east Asia that will be screened at the festival. It is in recognition of the films which have showcased the region to a global audience," KIFF director Yadab Mandal said.