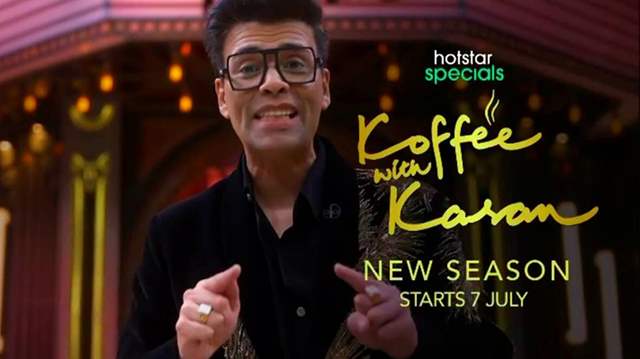 Koffee With Karan is the cult talk how which has ben the catalyst of many friendships, love stories, feuds and new bonds in the entertainment industry and otherwise. Fans went into a frenzy and were extremely enthralled when the new season of the show was announced.

Karan Johar just shared another promotional video for the program on his Instagram account, while there have already been a lot of teases and celebrity sightings from the sets. In a snarky and eccentric video, Karan Johar discussed the difficulties he encountered in persuading celebrities to attend his show.

Sharing the video Karan captioned it, "Screw it, I'm still going to brew it!☕ #HotstarSpecials #KoffeeWithKaran S7 new season starts 7th July only on Disney+ Hotstar". As per reports Sara Ali Khan and Janhvi Kapoor will be the duo who would grace Karan's couch for the first episode of this season.

Other celebrities, who have shared their pictures from the sets of Koffee With Karan include Samantha Ruth Prabhu, Ananya Panday, Vijay Deverakonda, Kriti Sanon, Kiara Advani, Shahid Kapoor, Kajol and her mother Tanuja.

Earlier Karan had shared a teaser of the show. It showcased humorous comments from the guests and was expertly edited from clips taken from prior seasons of the show. Sharing the video Karan had penned, "“Guess who’s back? And this time with some hot piping brew! #HotstarSpecials #KoffeeWithKaran S7 starts 7th July only on Disney+ Hotstar! @disneyplushotstar @apoorva1972 @aneeshabaig @jahnviobhan @dharmaticent.”

It would be exciting to witness a new set of celebrity pairings with a lot of fun, gossips and games. The show is all set to premiere on Disney Plus Hotstar from 7th July.