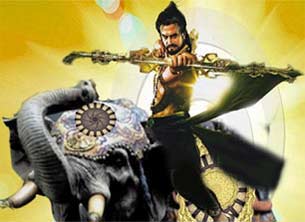 Big B launched the Hindi trailer of the forthcoming Tamil period drama here Sunday night, following which he took to his blog to sing the praises of Soundarya.

"Women Empowerment! At its best tonight as I inaugurate the latest Rajinikanth film directed by his daughter, Soundarya...a film made on the technology of Motion Picture Capture...truly amazing effort and a first for India.

"A proud moment for society where a girl takes on the challenge of a technology for the first time in the country, and makes it happen. A daughter pays tribute to her haloed father, in an affection that transcends all the cynicism that society still throws up.

"A father who entrusts his daughter with confidence and support to undertake this huge enterprise. Unlike some of the twisted norms being still practised in the country," added the thespian, who is a United Nations ambassador for Girl Child.