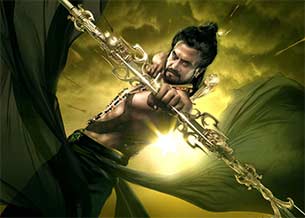 After months of delay, superstar Rajinikanth's Tamil period-drama "Kochadaiiyaan" is slated to release worldwide April 11, and its director Soundarya Rajinikanth Ashwin views the film as the next step in Indian cinema.

"Following last year's celebrations of India's film making centenary, we view the release of 'Kochadaiiyaan' as part of the next step of Indian cinema. For the first time a full length feature has been made using performance capture technology in India and I truly hope this creates a whole alternate film making avenue apart from live action films," Soundarya said in a statement.

"Kochadaiiyaan" features the unique visual mastery of photo-realistic performance capture technology for the very first time in the history of an Indian film. It is releasing worldwide in cinemas April 11, 2014, added the statement.

The film is an epic dramatisation of good versus evil starring Rajinikanth in a double role in a larger than life depiction. Also starring in the grand production is Bollywood actress Deepika Padukone with South India's leading stars such as R. Sarath kumar, Nasser, Aadi Pinisetty, Shobana and Rukmini.

"We are confident that this will be a landmark film in world cinema as a result of the ground breaking technology used. The film will be released in Tamil, Hindi, Telugu, Marathi, Bhojpuri, Bengali and Punjabi in India and overseas in more than 6,000 screens. We will be releasing an English version internationally as well," said Sunil Lulla, Managing Director, Eros International Media Ltd.

Oscar-winning composer A.R. Rahman has composed the music for the film, which has been along the lines of Hollywood films such as "Tin Tin" and "Avatar".

Eros International and Mediaone have also tied up with Karbonn Mobile to launch 1 million "Kochadaiiyaan" branded mobile phones to celebrate the release of the film.

The exclusive Karbonn "Kochadaiiyaan" mobile phones, which will be unveiled during the audio launch in February, will have screen savers and must-have images from the film along with the trailer and the signature tune of the film.

2 Weeks After Marriage, Poonam Pandey Gets Husband Arrested ...
36 minutes ago