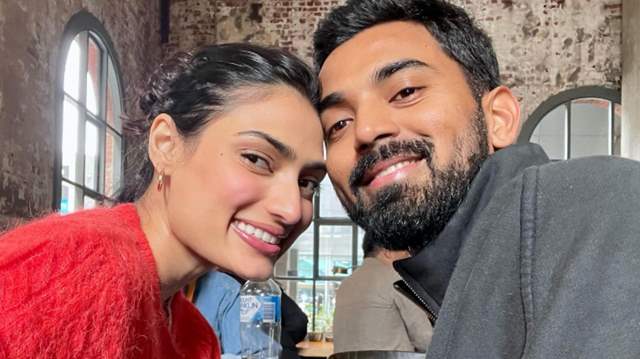 KL Rahul and Athiya Shetty made headlines with their budding romance. The two have been with each other for quite a few years and recently have started making public appearances together.

Today, the actress and Suniel Shetty's daughter Athiya is celebrating her birthday. Her boyfriend KL Rahul took to his Instagram handle to wish his lady love. He shared a bunch of candid romantic pictures and you won't be able to take your eyes off their chemistry.

Athiya is seen standing with her hand on his shoulder and grinning for the camera in the first image. However, KL Rahul is just focused on her in the snap. The next image shows Athiya pouting for the camera as KL Rahul stands behind her with his hands folded. In the final image, they are seen posing in a restaurant while joining their heads. All of the pictures seem to be clicked on the same day. KL Rahul is sporting a black jacket and sunglasses while Athiya is donning a red knit sweater and jeans. Sharing the pictures KL wrote, "Happy birthday to my 🤡 you make everything better ❤️"

Apart from that Athiya have supported KL by being an attendee of his matches and has also travelled overseas with him for the matches. On the professional front, Athiya's most recent appearance was in the 2019 movie Motichoor Chaknachoor with Nawazuddin Siddiqui.