"My Name is Khan" is on the floor and another 20 more shooting days to go and news are at buzz, much to KJo's distress. Our source from SF says he spotted Kajol and Shah Rukh at a local caf corner called "Karma Caf" some days back. He had tried to take pictures, but, sadly, he was asked not to by the production team.' 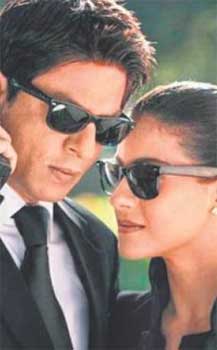 Featured Video
Would you like to know what he saw?

Not much though … According to our source, Shah Rukh and Kajol were sitting on a table chilling. SRK had a guy hold an umbrella over his head and Kajol is really pretty in person. The production team was all over the place. And there were many on lookers around… Children, police men, common public. Doesn't this seem like a scene from a shooting happening in an Indian city? Sure does to me!

And like any Indian living in , our source was hoping to see a dance sequence. Sadly that dream was not fulfilled!

Another piece of news is "twittering" around. The CBS5 page on twitter says "Crew for 's famed actor, Shah Rukh Khan, is in the newsroom, causing all the staff to titter and gawk." KJo had asked everybody to be quiet about this, but does this news really stay quiet?

As it seems, Karan had taken special authorization from the 's Film Commission Director, Stephanie Coyote, to shoot inside the CBS5 news studio.  While the whole time the crew was inside, many Indians living in stood outside hoping to catch a glimpse of their favorite star. As everybody knows SRK is favorite among most of the Indians living abroad (and also living in too). Who wouldn't want to see him in action? (Ahh! Billu Barber scene coming in mind right now, where the whole village had gathered to watch Sahir Khan in action!)

So, was SRK there in the CBS5 news studio? No, actually. Actor Parvin Dabbas (of thr Khosla Ka Ghosla fame) is apparently playing a news announcer in the movie and KJo wanted to shoot his scenes in a real news studio rather than in a filmy set news-studio.

You will … soon … just look for this space.

For the time being, why don't our San Franciscan visitors to the site tell us if you find something?
And everybody, are you excited? Which news piece excites you more?