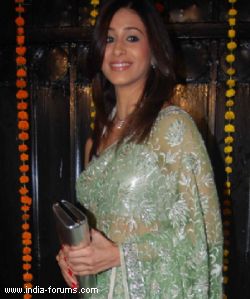 Tellybuzz has earlier reported about Rajan Shahi all set to launch his next show on Life OK, Amrit Manthan and now we hear that Kishwer Merchant will be a part of it.

A source says, "Kishwer Merchantt, popularly known as Hasina of Star One's Pyaar Kii Ye Ek Kahaani,will be seen in an important character in Rajan Shahi's upcoming show on Life OK, Amrit Manthan. It will be an episodic role."

We contacted Kishwer who confirmed the news, "Yes I am playing one of the important characters in the show. I can't reveal much about the character but all I can say is that it's a cameo. I took the show as its Rajan Shahi's show and I have heard a lot about him. A few of my friends have worked with him and so I wanted to do a show with him. Also, Sandip Sikand is a very good friend of mine, so I took up this cameo. The character is of a very rich and a classy woman."

Kishwer's entry will be shown in the 18th episode of the show.

swarima 8 years ago WELCOME back...& ALL THE BEST KISHWER !!

oneheartMalec 8 years ago welcome back Kishu di! really...missed u sooo much!

Looteri_Dulhan 8 years ago best of luck kish...hope u will rock again...

matwamango 8 years ago Cook. Best of luck Kish U will rock. Shame won't see U in it i am sworm off all life OK tv shows

Moodyblue 8 years ago Kishwer you have been one of my favourite actress since Hip Hip Hurray, also loved you in Dhadkan.
Best of luck for future.