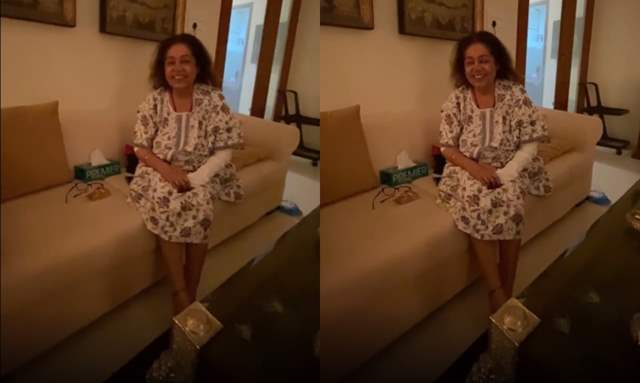 Actor and Bharatiya Janata Party (BJP) member Kirron Kher’s cancer diagnosis came as a shocker to the entire nation. While the actress is undergoing treatment and is on her way to recovery, everyone including her family are concerned for her.

Now, that she has minimised her public and social media appearances, fans are eager for a glimpse of their favourite actor and await the health updates. She made a brief appearance in an Instagram LIVE session by her son, actor Sikander Kher. Actor Anupam Kher was also seen greeting his fans during the LIVE session.

Beginning the Instagram live session Sikander informed that he's sitting with his parents and gives a glimpse of Mrs Kher’s feet. While her face was not visible, she was heard greeting everyone with a cheerful hello.

Sikander thanked fans and well-wishers for their wishes and informed them that she is doing better.. He said, “Thank you for all your love, now that you saw her feet. Thank you for constantly asking about her, she should hear this because I am not around all day when you ask, and she is here. Thank you so much, she is doing a lot better.”

Later, Kirron asked Sikander to show her face in the video. The actress looked frail but happy as she wore an arm sling. Greeting fans with a cute and beaming smile, she said, “Thank you everybody for your good wishes and love, thank you very much.”

"KherSaab and Kirron Ma’am. This one is short and sweet .. a hello from the family with tit bits from me as well .. thank you all for the love you send my mother," he captioned the video.

Anupam recently slammed a journalist for making insensitive remarks about his wife Kirron Kher who implied that he is 'changing his colours' because his wife 'has been asked to vacate her plum seat in Chandigarh' due to her illness.