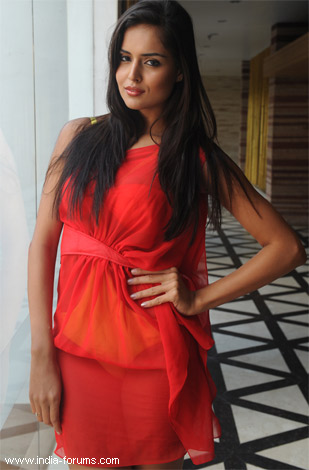 Indian Brazilian model Nathalia Pinheiro, who has won the Kingfisher Calendar Girl 2012 title, is eyeing Bollywood and wants to a carve a niche for herself in the Hindi film industry. She also hopes to work with her favourite actor, Shah Rukh Khan.

'I am a big fan of Bollywood movies and I want to see myself becoming one of the known names, but before that I want to polish my acting, dancing and diction skills because these three things are very essential to establish a foothold in the industry,' Nathalia told IANS soon after winning the title Wednesday.

The contest was aired on NDTV Good Times.

She has already signed a southern movie and is in talks to become a poster girl for one of the most elite international brands.

'Yes, I did sign a southern film, but I don't want to discuss about that as currently I want to enjoy the moment. I can see myself flying with such a big achievement,' she said.

Nathalia's had an Indian grandfather and a Portuguese grandmother. Her mother is Portuguese and her father is half Punjabi and half Portuguese. Born in Rio De Jinero, she has been in India for the past eight months.

She has a huge crush on Shah Rukh and wants share screen space with the Bollywood superstar.

'I really aspire to work with Shah Rukh Khan one day. He is the man to die for. He is one person who can enact every role so effortlessly, so yes, sharing screen space with him will be a true pleasure for me. Among actresses, I find Kareena Kapoor superb, she has amazing face and great personality.'

Item numbers are also on her wishlist, but her way of performing the song will be different from other actresses.

'Dancing is an essential requirement for any Bollywood movie. One should know at least the basic steps. I don't mind doing Bollywood item numbers, but yes I want to do it in a nice manner with a touch of sophistication. I don't want to sign any item number for the sake of money,' said the 21-year-old.

Nathalia, fondly called Nathy, started modelling at the age of 14, feels that the Kingfisher talent hunt helped her in getting recognition.

'I started modelling at the age of 14 with commercial and print ads, but I was not known to the world. I believe that until and unless you don't get a better platform, nobody will recognise you and Hunt for the Kingfisher Calendar 2012 did the same thing for me. I got the best platform and right people who taught me how to achieve my dream,' she said.