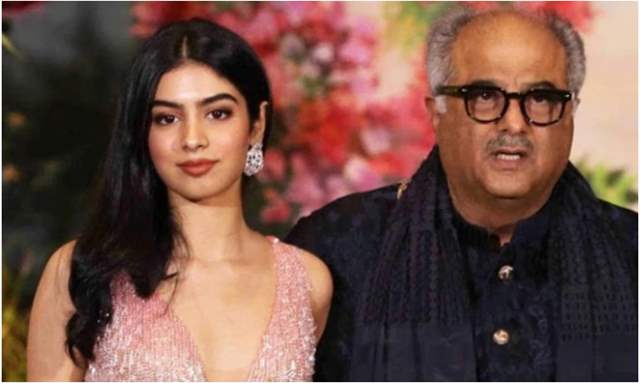 Producer Bonney Kapoor and Sridevi’s elder daughter Janhvi Kapoor has been making it big in the Bollywood. Now, her sister Khushi Kapoor is gearing up for her debut in Bollywood. However, the aspiring actress is yet to spill the details about her debut film.

There has been a lot of speculations about Khushi’s debut in the industry, and while no confirmation was received, her father Bonney Kapoor has now put the rumours on rest and confirmed the debut of his second daughter shared a few details about the same.

Clearly, Khushi is following her sister Janhvi Kapoor's footsteps into the industry and during a recent interview ETimes, Boney quipped that Khushi is keen on pursuing a career in acting. "You will hear an announcement soon," he teased.

Boney also asserted that he will not launch Khushi. The young actress will have a grand launch and will be done by another popular production house, added Boney.

“I have the resources, but I would rather have someone else launch her because I am her father and one tends to get indulgent. You can’t afford to do that as a filmmaker and nor is it good for the actor. Anil (brother Anil Kapoor) was still an established actor, so it didn’t affect him much, but I think I became an indulgent brother with Sanjay (Sanjay Kapoor) when he made his entry into films," explained Boney.

Interestingly, fans seem to be eager to see Khushi work her magic on the big screen as the young starling is already a star on social media. She recently made her Instagram account public and since then she has been treating her fans with some stunning pictures and videos which are high on glam and fashion.

Khushi Kapoor pursues an acting course in US; She will be launched in ...

Boney Kapoor disappointed about 'Maidaan' and 'RRR' clash at the box ...