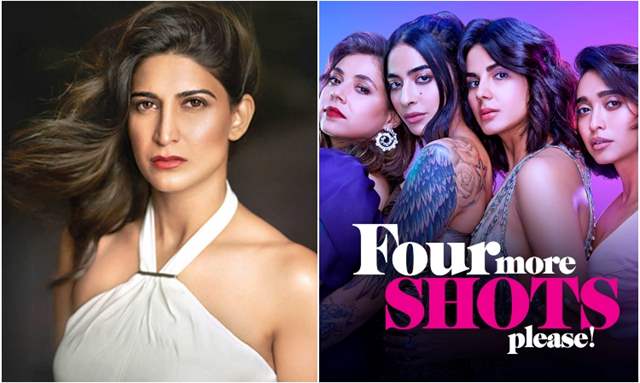 Aahana Kumra is gearing up for her most anticipated movie release ‘Khuda Haafiz’, which is slated to premiere on August 15 2020. Directed by Faruk Kabir, the action thriller stars Vidyut Jammwal and Shivaleeka Oberoi in lead roles, also starring Annu Kapoor and Shiv Pandit in supporting roles.

Aahana plays an Arab officer in this intriguing thriller drama, based on true events. Her hijab-clad look from the film personifies strength and vigilance and we cannot wait to witness her fierce performance on screen.

We got in touch with Aahana Kumra for an exclusive chat where she opened up about her shooting experience in Uzbekistan, doing action sequences for the first time and her journey in Bollywood.

Aahana started her journey with Television in her debut alongside Amitabh Bachchan in the show Yudh. Later, she went on to pave her way into Bollywood and gave a breakthrough performance in the film Lipstick Under My Burkha. However, it was not a smooth ride for her as she recalls the time she shot for the movie and what unfolded next:

“I remember I shot for Lipstick and the movie did not come out for two years. Then I had no work, nobody was offering anything. But I also feel that it’s my mistake because I don’t really make a proactive effort to go and meet producers but I also feel that I do not have that kind of ability. I do not have the ability to suck up to people or be a part of groups so no work came to me.”

She also adds, “However, anyone who has seen me on screen or worked with me has always had a recall value and has called me back. So later, I got a call for the show ‘Agent Raghav - Crime Branch’ with Sharad Kelkar, which I did for 9 months.”

Aahana says that only recently after the debate around insider-outsider’ started to gain mileage, she has begun to question herself ‘oh why don’t they call us for work.’

When asked if she was ever dropped from a movie or was replaced, Aahana reveals she has had an experience where she was dropped out of a film and also lost out on a big project for the same. She narrates her experience to us:

“Yes, I’ve had such experiences. I was dropped out from a film out of the blue, and I did not even hear back from the producers. Earlier, the producers had called me to their office and gave me a detailed narration. The director narrated the entire script to me and I went through the whole discussion of the shooting span of the film, the payments and more.”

“At the same time, I got another call for ‘Four More Shots’ and the producer Rangita Pritish Nandy called me late at night and asked me if I would like to be a part of the show. She told me, ‘There are four actresses and we do not have one actress finalised yet and if I would like to do it.’ I remember telling her that my dates were blocked for that film and I also suggested another actress for the part. And it worked out for that actor. However what happened with my film was that I was not informed or told anything, and suddenly I found out that someone else was doing that part. “

Aahana adds, “I get it when you do not want to work with me, that’s fine. I understand it is a professional call but I feel it is unfair to block somebody’s dates, waste their time and make them lose another project because of your indecisiveness. That’s what irritates me about this industry that many people don’t behave professionally.”

Aahana also talks more about not making friends in the industry, camps, mental health and more.

Check out the full interview here:

blackhole 1 months ago I liked her in Agent Raghav 💖

Karan Patel takes an indirect dig at Kangana Ranaut in ...
43 minutes ago

Neil Bhatt talks about prepping up for Ghum Hai Kisikey ...
-42 seconds ago