View Profile
Recommendation, introduction, sifarish or akalmandi, whatever is the term, the whole world is behind finding opportunity to get through the toughest barriers to grab fame and money. But the rising star in Bollywood sky, Sikander, hosts big no no to all these smooth turns to golden future.

One has to surely admire Sikander for this bold thinking. In this era where star kids are enjoying the benefit of their surnames and pocketing offers from the big banners, Sikander is one who doesn’t like flaunting his surname. He may be having the best combination of actors in his home, but he is not one spoilt lad who will take easy steps to success.

Like any other newcomer, he, too, has dreams of making it big in this glamour town but minus his surname. And this is very much seen in all the banners of his upcoming film Woodstock Villa where his name is conspicuous with the absence of his family name Kher.

When we questioned him whether the skipping of surname is deliberate or out of superstitions, he said, “I have never used my surname, and I like being called only Sikander.”

Surely, he knows one big sach which all star kids try to avoid that at the end of the day you will be known for your acting skills rather than surname. Not much time has passed when Abhishek in one of his interviews said, ‘I don’t believe when astrologers say that I will be more successful if I pick up Bachchan from my name. In fact the truth is that I will be no one without Bachchan. Abhishek is nothing without Bachchan’. Very true Abhishek, but it’s acting and only acting which can take you far. We really hope that Sikander’s hard work and long struggle pays off. Here’s wishing this young actor a happy future ahead. 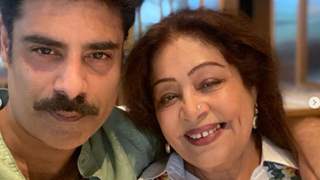