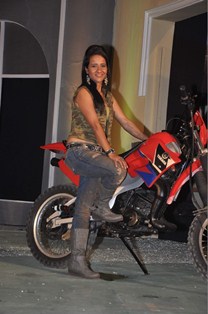 Stunt woman Geeta Tandon, who got eliminated along with actress Gauhar Khan from Khatron Ke Khiladi Darr ka Blockbuster, says her stint on the stunt-based reality show was an "exciting" experience.

"The show has given me a lot of exposure and thankfully, I have scored a great opportunity to further my future as a result of the show," she added.

Also, the show helped her fulfill her dream of taking her art and stunts internationally.

Seen as one of the strong contenders for the title, Geeta performed week after week, but she couldn't survive the 12th stunt, which led to her ouster from the show.

Geeta shared a great rapport with the show host and her mentor Rohit Shetty and she believes she would not have survived this long without the guidance and motivation from her "guru".