The Aa-ra-ra-ra-ra lady Ketki Dave who is famously know as Dakshaben will be soon entering the SAB show Lo Ho Gayi Pooja Iss Ghar Ki. She will be seen in a complete new avatar. 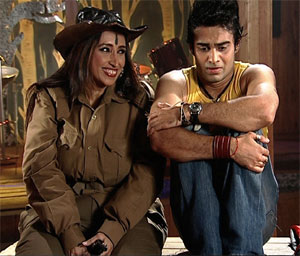 Featured Video
She will be donning the look of a Gujarati Don in the show. “It’s a funny avatar as I will be essaying the role of a lady don in the show,” says Ketki.

Elaborating on her character she explains, “Don Rita is a very fat lady who is married to a guy who is very young called Aman Shetty (Amit Dolawat).”

What was the reason for taking up this show? “I was looking out for some cameo and this show came my way. After listening to the script and character, I just said yes. It is really exciting to essay this role,” she quips.

She is a fat lady in the show, so it was quite difficult for her to carry out the outfit. “It’s terrible to wear this outfit as it’s very heavy and I feel so hot after wearing it. Though there is this problem, I’m enjoying this stint,” she concludes.

We also talked to Amit Dolawat who has a double role to play in the show. He plays the love interest of Pooja, and also Don Rita’s dominated husband. “Well it’s quite interesting to essay the role of Aman Shetty who is married to the lady double his age. He is presented as a don but is a good guy at heart. There is some situation that turns him like this.”

To add fuel to fire, further chaos is created when ‘Aman’ (Amit Dolawat) and ‘SMS’ (Mushtaq Khan) run into their respective doubles resulting in evident confusion and mayhem in the show.

Ketki in and as Don… seems interesting, but lets see if the show goes as per the expectation of its audience.