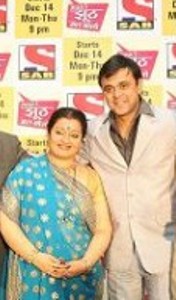 Kaun Banega Crorepati fever is on and the same fervor will soon catch our Damini Devi (Apara Mehta) of SAB TV's Sajan Re Jhoot Mat Bolo, to the extent that she stands stubborn to take part in actual game show with Amitabh Bachchan.

A close source says, "Soon the show will see a track where Damini Devi urges to take part in Kaun Banega Crorepati along with Amitabh Bachchan. Being a drama artist, that's really not her cup of tea to be on the hot seat and give all the right answers to the questions asked. In order to respect her feelings, all the other family members will set up a duplicate set of KBC for her, where Apoorva (Sumeet Raghavan) will be seen as Big B, playing Kaun Banega Crorepati with his mother."

"Sumeet Raghavan will dress up like Big B and Apara will be seen on the hot seat. The production house is going to prepare a set just like the actual KBC set. The track focuses on the overall drama where Damini Devi being a drama artist makes a blunder with her answers. The shoot for the track will commence within couple of days and will go on air later on, "signs off our source.

We contacted Apara Mehta who confirmed the news, "Yes, we have scripted such a great track where I will be seen on the hot seat answering to Sumeet who will be the Big B on the show."

Sumeet Raghavan too confirmed the news.

Angelic_A 9 years ago This is going to be a fun track to watch.

divinedivy 9 years ago there should be some track which focuses on aarti...she is also a part of the family

Rhea Sharma to be seen in Ekta Kapoor's next?
34 minutes ago