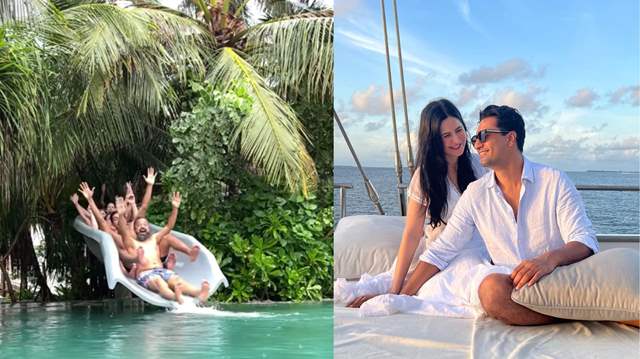 Kaif recently posted a video from the Maldives trip on her social media accounts in which she and her friends can be seen having a blast as they ride a water slide. The video is surely going to put a smile on the face as the gang slides down together having the time of their life and showing fans their inner child. Sharing the video, Kat captioned it as, "Yeh dosti!" and we can hear the song Yeh Dosti Hum Nahin Todenge play in the background.

A few hours ago, Kaushal also took to Instagram and posted a picture of himself and his wife Katrina, in which they can be seen smiling together in the outdoors on a yacht. Additionally, the couple can be seen twinned in white. Vicky annotated the image with an infinity sign after sharing it.

Social media has been flooded with their Maldives pictures and fans are surely in for a treat as the pictures are too cute to be missed.

Talking about Katrina's professional engagement, she is presently awaiting the theatrical release of Phone Bhoot, starring Siddhant Chaturvedi and Ishaan Khatter which will hit the screens on October 7th. Next, the actress will co-star with Vijay Sethupathi in Merry Christmas. In addition, she plays the lead part in the action-thriller Tiger 3 opposite Salman Khan and Emraan Hashmi.  It is set to hit the big screens on Eid 2023.