View Profile
The latest news is that the Barbie girl, Katrina Kaif, may soon be seen romancing Mr. Amitabh Bachchan. In her so far successful career, she has romanced a lot of heroes, 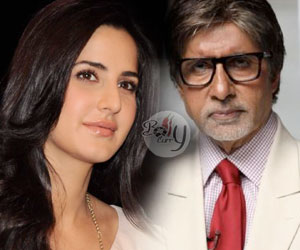 from the young new comers such as Imran Khan and Ranbir Kapoor, to the 3 top Khan's of the industry - Shahrukh, Aamir and Salman. And now the actress will get the chance to work with one of the biggest actors of his time, Amitabh Bachchan, in quite an ultra unique jodi!

This unique combination is brought to you by none other than director Nikhil Advani, the powerhouse behind successes such as Patiala House and Kal Ho Naa Ho. Nikhil went to London to approach the diva for this role, and it's only after she returns from London that she'll give the final approval.

The upcoming venture is named Mehrunnisa and follows the life and journey of a young girl from an early age of 20 till the time she turns 60. This will be the first time we'll see Kaif romancing an actor much older than herself. On the other hand, Big B has a bit more experience in starring opposite younger actresses. In 2007, he created quite a stir when he was seen romancing Jiah Khan, who is 45 years his junior, in Nishabd. Later that year, he starred opposite Tabu, who is 29 years younger than him, in Cheeni Kum.

If Katrina does accept the role, it will probably be her most challenging role till date. Katrina's acting skills have always been under heavy scrutiny and performing such a role will not be an easy thing. However, if she successfully pulls it off, she can prove once and for all that she is as talented as she is beautiful.

Will this Kaif-Bachchan duo be able to create BO magic? Only time will tell; in the meantime BollyCurry wishes the best of luck to both actors!