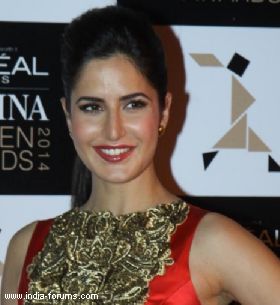 Actress Katrina Kaif, who flaunts four Indian bridal looks for an ad, says she liked the Lucknowi avatar the most for its elegance and minimal yet glamorous look.

The commercials highlight Slice's three new variants chosen from across the country.

"It was a spectacular experience to dress as a multiple bride for this beautiful concept called Slice Swayaamvar. I love the fact that India has such a rich culture to borrow from when it comes to bridal splendor, and each region has its own trademark style," Katrina, who mostly dresses up in western attire for films, said in a statement.

"I was floored with all the looks, because each look is so traditional, yet has refreshing elements of modernity. My personal favourite was the Lucknowi avatar as it is very elegant, minimal yet glamorous and akin to my style statement," she added.

As a Lucknowi bride, Katrina looks stunning in vintage shades of green and baby pink, created by a silent embroiderer in the Lucknowi gharana style, with a modern adah of crystals. A sharara with golden detailing and transparent sleeves completed her ensemble.

The "Dhoom 3" star drapes traditional Kanjivaram sari for the Southern look that was reinterpreted as a structured contemporary gown, with a 10-foot trail, along with heavy golden South Indian temple jewellery inspired mathapatti that completed her look as a royal South Indian bride.

Rakul Preet Singh confesses to being a part of drug chats ...
19 minutes ago