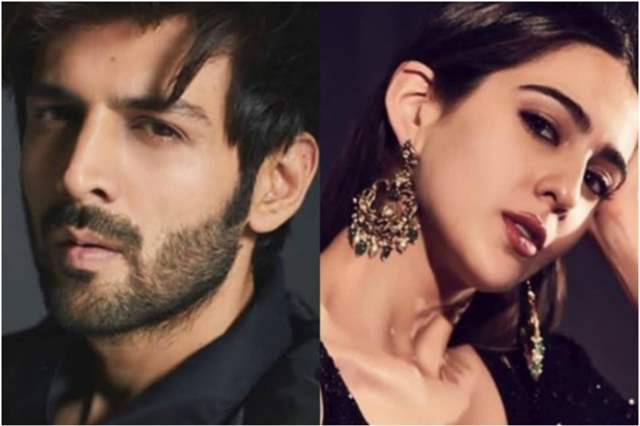 There was a time when Sara Ali Khan couldn't stop talking about dating Kartik Aarya. SHe publicly expressed her interest in the Luka Chuppi star and said that she has a massive crush on him. After a few days, we got to know that the two are apparently shooting for an Imtiaz Ali directorial together and hence are so much into each other.

It seems that the two are head over heels for one another. We spotted a girl looking like Sara Ali Khan dropping Kartik Aaryan at the airport. Now Sara herself flew to Lucknow where Kartik is shooting for his next Pati, Patni aur Woh. What's more amusing than her visit to Lucknow is the way Kartik is seen treating her.

In a video which is doing the rounds on the internet, we can see that an unruly crowd mobbed the duo and Kartik got rather protective of the Kedarnath star. Even Sara looks quiet amused by the Kartik handles it all. With fans flocking around them in huge numbers, the two seem to be rather relaxed. Have a look:

With his arms around Sara to protect her, this video has got the fans all blooming with hope of these two making an official statement of them dating. It's that or it may be just a publicity stunt for their upcoming movie Love Aaj Kal 2 together. Any who, till the time we have some real proof or an announcement from them, we can only say that we are guessing.

On work front Katrik Aaryan was last seen in Luka Chuppi alongside Kriti Sanon and Sara has two movies, Simmba and Kedarnath to her credit. She is one of the most promising talent we have in our tinsel town and has a massive fan following already. While only time will tell if they are dating or not, it's for sure that these two have a great future ahead in Bollywood.