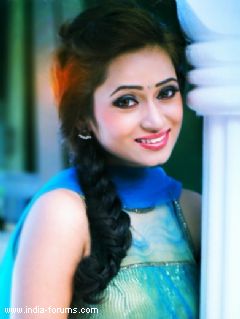 Pretty actress Karol Zine, who was last seen doing a cameo in Star Plus' popular show Diya Aur Baati Hum is currently busy doing a show Lakeerein Kismat Ki which airs on Doordarshan. The talented actress will soon be seen in a Marathi movie too for which she is currently shooting for.

TellyBuzz spoke Karol to know more about her Marathi movie and her character in the movie. Talking about the movie, she told us, "I am playing the lead in the movie. The movie has no hero and it has only 3 heroines. The movie has been titled as Bhavishya Chi Ashi Tashi. There are very less movies made in Marathi which are women oriented and this is going to be one of it. The story of the movie revolves around 3 girls who have come to Mumbai and living on a rent together. One girl among them strongly believes on superstition and astrology while the other doesn't. My character is the one who balances between both the girls. How their lives will change and gets affected, is the story all about."

We quizzed Harshali as what are her expectations with the movie to which she told us, "The movie is going to be 100% hit. Long back this kind of a movie was made in Marathi. It's based on today's subject and it's going to be a hit. The movie has covered lots of things about women's safety and other issues related to women. Several other issues like cyber crime have also been covered. Many small messages have been conveyed through this movie so it's going to be a hit. It's a nice film. We are about to complete our shoots."

Karol, who is currently busy doing a show Lakeerein Kismat Ki on Doordarshan also shared about her show. She shared, "It's a very nice character. The show is produced by Paintalji and it's a great experience working with him. He also directed few of our scenes initially. I get to learn a lot from him and I felt like as I have joined any acting school."

Way to go Karol! We wish you all the best!

b2011 6 years ago Diya Aur Baati Hum Rocks
Thanks TB for article...

pasurYa 6 years ago Thanks for the article...

b2011 6 years ago Thanks TB for the article. This actress just acted for a couple of episodes in fake jewelry track which was wrapped up soon.