Saif Ali Khan has all the reasons to celebrate as he turns 52 today. The actor has been in the industry for more than 30 years now and has been proving his mettle each passing day. He has given some terrific hits to the box office and has aced every role from a mushy lover-boy to a ferocious villain.

While wishes and greetings have been pouring in for the actor since midnight, there have been few special one's that have captured the fans attention. Saif's sister-in-law and also co-star Karisma Kapoor took to her Instagram handle and shared a lovely throwback picture of the duo while wishing him.

In the picture, Lolo as usual is looking gorgeous in a halter-neck top and Saif appears dapper as both the stars flaunt their cool shades. Sharing the picture Lolo wrote, "Happy Birthday Saifu", with hugs and cake emoticons. 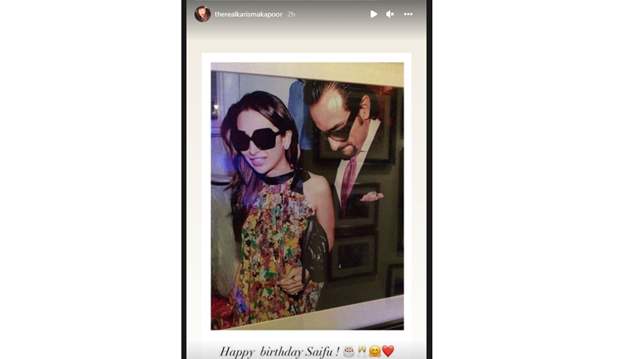 Earlier, Kareena also took social media by storm as she had a quirky wish for her hubby. Sharing an adorable picture of him pouting, Bebo wrote, "Happy Birthday to the Best Man in the world You make this Crazy ride Crazier and god I wouldn’t want it any other way..These pictures are proof I Love you my Jaan and I have to say your Pout is way better than mine …What say guys? #Birthday Boy#My Saifu."

Talking about Saif's professional engagements, the actor will next be seen in the film 'Vikram Vedha'. He will star alongside Hrithik Roshan in the film which also features Radhika Apte.