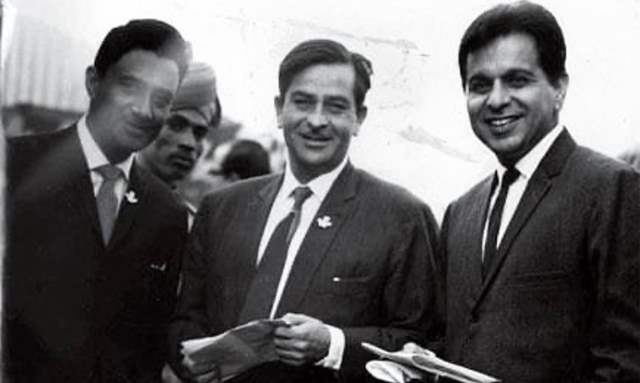 Legendary actor Dilip Kumar passed away on Wednesday in Mumbai. He breathed his last at the age of 98 after a prolonged illness.

As the entire nation mourns the demise of the screen icon, Karisma Kapoor took to her social media handle and paid her last tribute to the actor. She shared an unseen throwback photo featuring Dilip Kumar, her grandfather, Raj Kapoor and late actor Dev Anand.

Karisma is an avid social media user and she is known to share several throwback photos of her grandfather, Raj Kapoor and other members of the Kapoor family.

Remembering the late actors who shaped the Hindi film industry Karisma shared a monochrome picture of Dev Anand, Raj Kapoor and Dilip Kapoor. They were known as the golden trio of Bollywood, who graced Hindi cinema with several blockbuster films. “The legendary trio (sic),” Karisma captioned the post.

Meanwhile, Karisma Kapoor’s sister, Kareena Kapoor, also bid farewell to Dilip Kumar on social media with a special throwback photo. In the monochrome photo, Dilip Kumar and Raj Kapoor are holding onto each other and smiling to the utmost glory. “RIP (sic),” Kareena captioned the post.

Dilip Kumar passed away at the age of 98. The Indian Cinema Thespian was taken to a hospital last week after complaining of breathlessness - the second time he was hospitalised this month.

He was diagnosed with bilateral pleural effusion, a build-up of excess fluid between the layers of the pleura outside the lungs, and underwent a successful pleural aspiration procedure. He was discharged after five days in early June only to be admitted to the hospital again later in the same month.