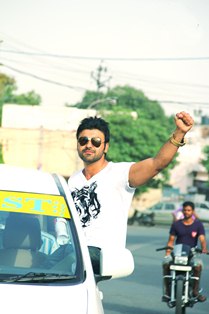 After facing a rap from host Salman Khan in the Weekend Ka Vaar episode of Bigg Boss this week, a riveting dance performance with gusto, may have come as a breather to Housemates Karishma Tanna and Aarya Babbar.

In the latest episode of the reality show, they seemed to dance their blues away with other contestants, swaying to the superhit Sallu bhai number Mera Hi Jalwa from Wanted.

Arya and Karishma, who have a brother-sister bond in the show, have developed a common dislike for the new emerging couple of Gautam Gulati and Sonali Raut. Earlier, Gautam was cornered by almost everyone in the House, after he uttered derogatory words for Karishma during a game-task in the show.

Later, Arya pulled up Gautam in front of all the contestants alleging that he was playing double. "You (Gautam) have been singing a song for one girl (his ex 'close' friend Diandra Soares) and then singing the same song for another girl (Sonali) the next day," Aarya pointed out, asking him to stop playing with emotions and respect women. But Sonali Raut did not take kindly to Aarya's comments and rebuked him, stating he was objectifying her.

"Diplomacy is not Aarya's forte and there are times in Bigg Boss when Housemates come across instances when they are torn between gauging a situation and taking a stand," says Aarya's publicist Dale Bhagwagar, who incidentally, also happens to handle the media for Sonali Raut.

Then, isn't this a clash of his own two clients in Bigg Boss 8. "It is," admits the Bollywood PR specialist. "But rather than a clash between people, I see it as a clash of their perceptions."

"Arya and Sonali are individuals with different mindsets, thought-processes and personalities," Dale explains. "By taking a stand, Arya has shown he cares for women and would not hesitate to express his beliefs. By asserting her point of view, Sonali's stance has revealed, she is a woman of substance. At the end of it, both are contenders in the House of Scandal."

Amy07 6 years ago I so agree Aarya cannot be diplomatic and thats why people misunderstand him plus he told the truth while other housemates too felt the same about Gautam Sonali but simply bitched personally and Aarya told directly to them ...I really feel he is very genuine and honest but need to stop being a teacher and just focus on himself..