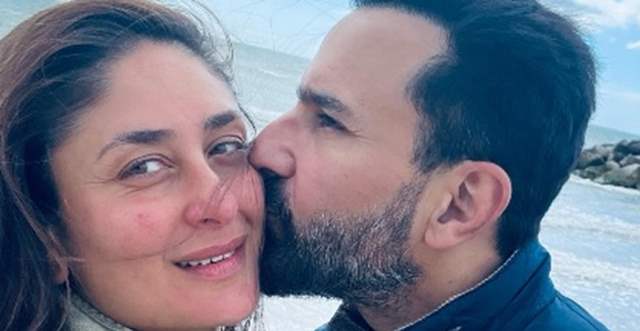 Bollywood star Kareena Kapoor Khan is currently holidaying with her family in London. She has been posting snippets from her vacation on social media, including time spent with the Kapoor family as well as catching up with pals like Manish Malhotra and Karan Johar.

The Udta Punjab actress is having the time of her life with hubby Saif Ali Khan and kids Taimur and Jeh as her social media posts are a proof of the same.

The Jab We Met actress recently shared a slew of adorable moments on her social media with her hubby and also added a little note which read,

“Beach Pe a Jacket and a Kiss…the English Channel …#Is that summer in England?😍”

The lovebirds were smiling their best smiles in the first image. While in the second picture Saif can be seen kissing Kareena on the cheek, and the two of them seem adorably cute. The duo was posing for cute pictures at the sea. Lastly, Bebo gave her admirers a dreamy selfie flaunting her no-makeup look and perfect freckles.

Meanwhile, on the work front, Kareena recently wrapped up shooting for her next ‘The Devotion of Suspect X’. She would be seen sharing screen space with Jaideep Ahlawat and Vijay Varma in the same. She is also awaiting the release of ‘Laal Singh Chaddha’ with Aamir Khan. Saif Ali Khan on the other hand is currently awaiting the release of ‘Vikram Vedha’ where he would be seen alongside Hrithik Roshan.