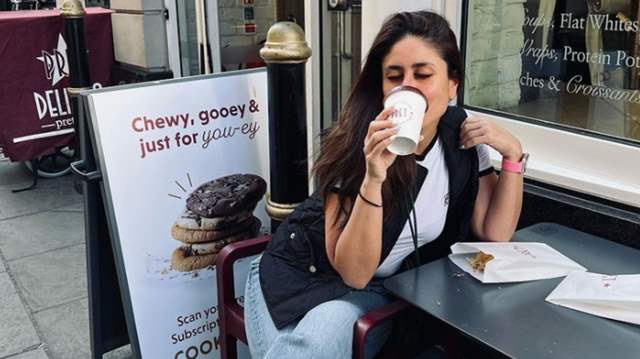 Kareena Kapoor is always on one toe when it comes to staying active on social media. She knows how to keep her fans and followers engaged with her personal as well as professional life. She frequently shares pictures and videos from her sets, family get togethers, vacations, getaways or her BTS clips.

While it has been quite evident, the love Kareena holds for coffee, she once again proved it with her latest post. Bebo took to her Instagram handle and shared an adorable picture of hers sipping on to her favourite coffee.

In the picture, the Jab We Met actress can be seen donning a white tee. topped with a sleeveless black jacket and gray pants. Sharing the picture Bebo penned, "Waited two years for you baby❤️Pret #Sipping my coffee ❤️Coffee Lover❤️".

She posed candidly for the lens and as usual appeared flawless. Recently Kareena shared another picture on her Insta handle which captured the hearts of her fans. Owing to the occasion of Father's day, she dropped a lovely throwback picture with her dad Randhir Kapoor and penned a heartfelt note for him.

Meanwhile, Kareena Kapoor just wrapped the shooting of her film, The Devotion of Suspect X. The movie is based on Japanese novelist Keigo Higashino's best-selling novel of the same name from 2005.

Sujoy Ghosh directed the murder mystery thriller, which also stars Jaideep Ahlawat and Vijay Varma. The 3 Idiots actress announced the news on her Instagram page. The actor posted pictures with the film’s team and wrote, “DSX! The best crew, best ride, best times… and I’m pretty sure the best film too. Get ready @netflix_in… this one is ... @jayshewakramani @akshaipuri @itsvijayvarma @jaideepahlawat #SujoyGhosh.”

Apart from this Kareena will also be seen in Laal Singh Chaddha alongside Aamir Khan. The film will hit the big screens on 11th August, 2022.

+ 14
1 months ago I don’t need KKK. a sleepless night with two kids is enough to pick a cup of coffee for me🤣