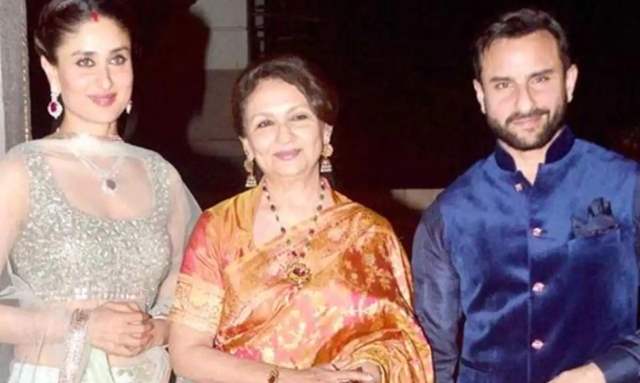 Kareena Kapoor Khan turned author with the release of her book - ‘Pregnancy Bible’ which narrates the stories of her pregnancy journey, hoping to inspire all the future mothers. In the book, the actress revealed that she has received a lot of support and encouragement from her family when she was expecting Taimur Ali Khan and Jeh.

The Laal Singh Chaddha actress credited her husband, actor Saif Ali Khan, her mother Babita and her mother-in-law Sharmila Tagore for their encouragement during her pregnancies. Further Kareena also stated that her mother, veteran actress Babita Kapoor is her role model and had inspired her to keep going.

In her book, Kareena has also credited Saif for standing by her and tell her that she could do it all.

Kareena wrote, "Saif told me I could do it all. He and I have worked hard to build a strong foundation for our relationship, and I truly believe my kids will always have that to stand on. And, hopefully, Jeh will be as confident as Taimur, because of his parents."

She continued, "My mother-in-law was also among the first to tell me that I had to keep working. Her advice was to do whatever I wanted but with confidence. She did some great work in the movies after her marriage and kids and was a real inspiration. My mother is also a strong role model for me, and she and my father both told me I must keep at it."

The 40-year-old actress admitted that 'nothing' can really prepare a woman for childbirth, but said that having strong support is important. Kareena returned to work a little over a month after Jeh's birth, when she filmed an episode of the reality show Star vs Food. During her second pregnancy, she appeared in numerous commercials, and continued working till the end of her term.

Kareena is the daughter of Randhir Kapoor and Babita. Her sister Karisma Kapoor is also the mother of two kids, although they're much older than Taimur and Jeh.

13 days ago Don’t know what the big deal is. Women all over the world work right until the end of Pregnancy and some go back to work shortly there after.