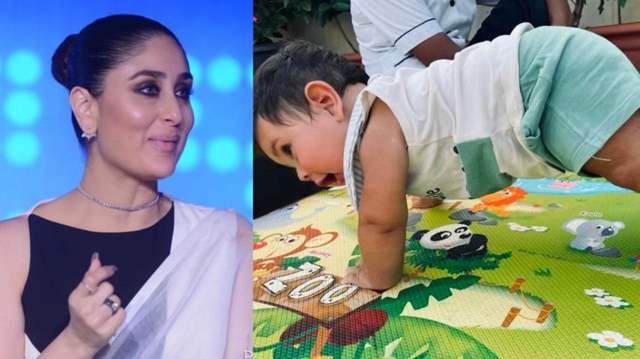 Kareena Kapoor Khan recently travelled to London, which is one of her favourite places. The actress is quite active on her social media as she often shares glimpses of her work and personal life as well. The Veere Di Wedding actress treats her fans on social media from family pictures to behind the scenes and a lot more.

She has been flaunting her peaceful trip to her followers on social media. Recently, the 3 Idiots actress shared a picture of her little munchkin Jeh Ali Khan on Instagram in honour of International Yoga Day.

In a picture that Kareena posted, Jeh could be seen trying to balance. The munchkin is seen sporting white t-shirt, blue shorts, and a bib for use when dining. Sharing the picture on her handle, Bebo wrote,

Fans are already in love with this adorable yoga practitioner in-house and just can't stop showering their love on the same.

Meanwhile, Kareena recently wrapped up the shoot of her OTT debut. Apart from this, she also has 'Laal Singh Chaddha' with Aamir Khan, Naga Chaitanya and Mona Singh.