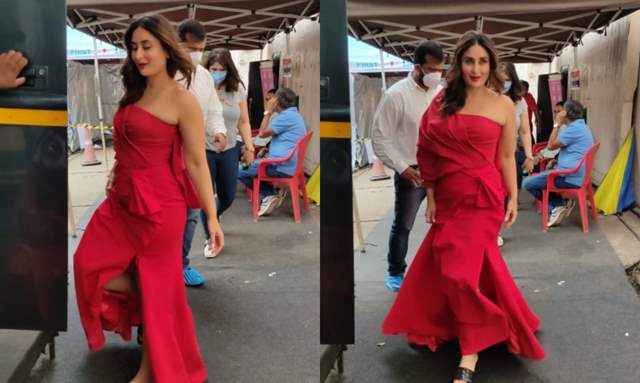 Actress Kareena Kapoor Khan knows how to make it to the headline. Be it her elegant ramp walks, photoshoots or the ace performances in the movies, the 40-year-old actor has successfully decorated the newspapers for more than 2 decades now.

And Bebo definitely knows how to make an entrance.

Earlier today, the actress and mommy of two, was seen on the film sets. She made her presence felt as Kareena was seen glammed up in a one-shoulder gown for a shoot in Mumbai.

The beautiful diva looked gorgeous in a bright red gown as she arrived for the shoot.

In the latest pictures, the actress was seen wearing a red one-shoulder ensemble that featured an exaggerated bow detail that extended from the shoulder up to the waist. The actress completed the look with a bold red lip shade, exaggerated eye make-up, and dewy skin.

There’s no denying, this might be one of our favourite looks of the actress, ever since she welcomed baby Jeh.

Meanwhile, on the work front, Kareena will be seen starring in an Aamir Khan film 'Laal Singh Chaddha'. While rumours are rife that the star has a bunch of films in her kitty, she has not yet announced her next.