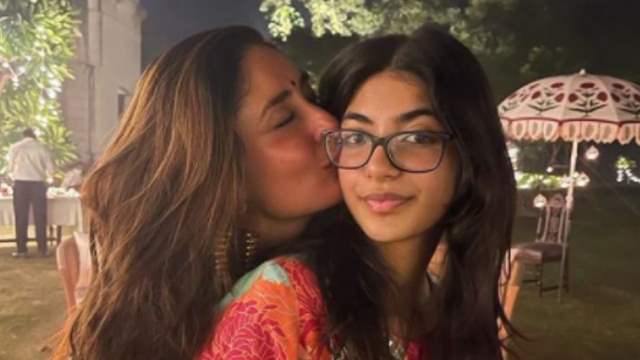 Kareena Kapoor Khan took to social media again this year to wish her niece, sister Karisma Kapoor's daughter Samaira a happy birthday. Karisma Kapoor and her daughter tenderly cuddled her in a childhood photo shared by the actress.

The actress wrote a touching post to her niece, describing her as a "wonderful elder sister" to her boys Taimur and Jeh, as well as her own brother Karishma's son Kiaan Kapoor.

"Mamma ‘s baby girl…fabulous elder sister to our boys …Kind, gentle and beautiful…All of 17. Happy birthday to our Samaira love you so much @therealkarismakapoor #Lolo ki Beti Sam is 17."

Last year, too, Kareena had shared a throwback photo and revealed that Samaira lovingly calls her 'BeboMa'.

Comments for the birthday girl began coming in almost immediately after she shared it on social media. Saif's sister Saba, as well as renowned designer Manish Malhotra, sent her their best wishes.

Karisma and Sunjay Kapoor have a daughter named Samaira Kapoor. After marrying in 2003, the couple divorced in 2016. Samaira and Kiaan reside in Mumbai with Karisma and have a good relationship with their father.

A few days back, Bebo and Saif Ali Khan’s second baby boy, Jeh Ali Khan turned one. An intimate birthday party was hosted by the couple at their house with Ibrahim and Sara Ali Khan, Saba Ali Khan and Karisma also attending the bash.

On the work front, Kareena will be seen in ‘Laal Singh Chaddha’ with Aamir Khan. The film was supposed to release in April but the makers have now postponed it to August this year.