Shahid Kapoor and Kareena Kapoor, who ended their relationship on a bitter note after Jab We Met, have finally started talking to each other once again! The duo, who some time ago could not even stand to see the sight of each other, recently hit it off at the recently held Filmfare awards function. 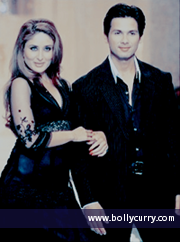 Having broken up acrimoniously in 2007, the actors were said to have such negative vibes that both could not even bear being near each other. Two years ago, when having almost bumped into one another at another award function, they turned the other way to avoid any contact.

But seems like with the entrance of Saif in Kareena's life and Priyanka into Shahid's life, they are finally ready to let the past go and move forward! Kudos we say!

It was apparently Bebo who made the first gesture. Upon seeing Shahid and Sharukh having a conversation, the actress greeted them with a hello instead of walking past them leaving both stunned but Shahid promptly reciprocated letting bygones be bygones.

They both plan to bury the hatchet and make formal friends with each other again. Saif was very cool about the patch up but it is yet to be known how arch nemesis Priyanka feels about this budding friendship.

With a reformed friendship on the way can we expect them to appear in a movie together?