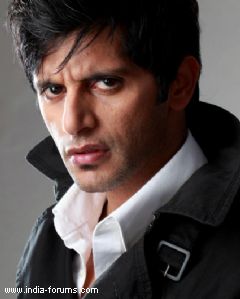 Karanvir Bohra has been absent from Television world for quite some time now. His last brief stint was on Colors dance reality show Jhalak Dikhla Jaa Season 6. He has turned a producer with a Punjabi flick Love Yoou Soniye staring himself with his wife Teejay Sidhu.

The dashing actor it seems is making up his mind for producing a Bollywood flick and says, "Well yes, there are plans and we will make an announce about the same. Definitely we will be producing a film in Hindi too and about the star cast it's too early to say anything. It's like ek baar khoon chak liye to aadat pad jati hai..."

There were rumors about Teejay and Karanvir participating in Khatron Ke Khiladi. When we asked to Karanvir about the same, he clarifies saying, "Well it's not right to comment on anything until the things get finalized. If ever I get selected for the show, I would love to do it as both of us are very adventurous."

As mentioned earlier that Karanvir is an adventurous person, we asked him about what does adventure mean to him and he says, "Adventure for me is to go in an unknown zone. It is to risk life and I feel it is like khatron se khelne ki kshamta... Recently an adventurous thing that we have done is producing a flick."

Well, now only time will tell whether Karanvir is a Khatron Ka Khiladi or not. We wish him all the very best for his future endeavors!!

Pyarme 6 years ago You go man i knew you are focused and talented Now please please try to cast Sanaya Irani and Barun Sobti in your flick i say a side role will do too even a cameo too.

ntmrjn 6 years ago all the best karanvir but missing u in tv.hope u take sth.