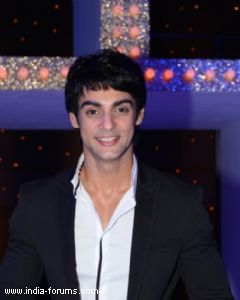 Cool hunk Karan Wahi who has gained immense popularity with his acting and anchoring skills which was seen in the popular couples dance reality show Nach Baliye season 6 on Star Plus, and having entered the filmy world as the actor is set to make a debut with Yashraj's upcoming film Daawat E Ishq, is now climbing the ladder of success.

The dashing actor has bagged a second movie and thus has posted about the same on the social networking site stating- 'Shooting finally for the much awaited second film ...excited...'

Karan who is very much active on the social networking sites, recently also tweeted on twitter as, Big day...need ur wishes.' Karan did get best wishes from his friends from the industry for his tweet. One of his best buddies Kritika Kamra tweeted, 'You'll kill it Wahiii !!! Bestest wishes. Super happy for u.'

We contacted Karan Wahi to know more about the same, he said, "Sorry, I can't comment anything on it right now."

Well, we wish Karan all the best for his movie!

Priya80801 7 years ago Happy Holi Karan Wahi!! Big smile
May God gift you all the colors of life, colors of joy, colors of happiness, colors of friendship, colors of love and all other colors you want to paint in your life. All the very best for your movies! Thumbs Up Love you loads!Good luck for your movies Karan :D Love ya mwahEagerly waiting to see you on silver screen Karan Wahi
Like Disli

Prisiprisi1 7 years ago Good luck for your movies Karan :D Love ya mwahEagerly waiting to see you on silver screen Karan Wahi

Riyawahi 7 years ago Eagerly waiting to see you on silver screen Karan Wahi Tongue All the best for your movies! Love you!

7 years ago All the best Karan Wahi