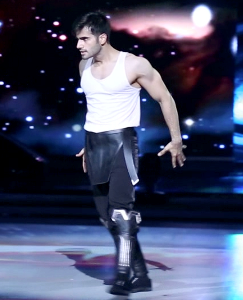 Handsome hunk Karan Tacker who is seen shaking his legs on the stage of popular dance reality show Jhalak Dikhhlaa Jaa Season 7 has been taking efforts to show his perfect performance in front of the judges but however, is yet to reach to the level and achieve good marks from the judges.

For Karan's fans there is  a bad news as he was hurt and is in pain while he was rehearsing.

According to the sources, "During technical rehearsals Karan got a sprain on his neck while lifting his choreographer Elena as his latest dance form requires many lifts and specifically for rehearsals Karan took more no. of trials which increased his pain."

As Karan is a non-dancer, he is trying his best to stand out in his performances and give a perfect performance to the viewers as well as to the judges.

Karan even tweeted about the same on twitter which states as follows "In pain, injured , immobile ,fed up. Credits #Jhalak"

Well, take care Karan Tacker, your fans are hoping to see the best performances from you in Jhalak Dikhhlaa Jaa Season 7.

MFRanjini 6 years ago Get well soon Karan Tacker. Love you very much.

yessehm 6 years ago Get well soon.
Like your effort and hard work.
Also good to see the 'real' Karan.
You seem like a genuine, down to earth and regular kind of guy - I mean that in a good way

day_lily 6 years ago All the best for your performance Karan Tacker!!

rukhsar.crazy 6 years ago get well soon dear
all our wishes with u
but plz plz plz
come what may
dont quit...