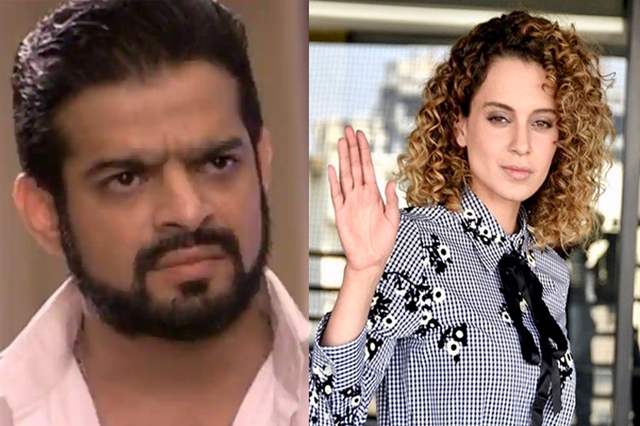 We all know and have come across multiple instances of how actor Kangana Ranaut has landed herself in multiple controversies but is more so known to speak her mind too. Her recent comments on Sushant Singh Rajput's demise and nepotism drama surrounding Karan Johar have been the talk of the town too.

And while we are talking about the late actor, we all know how actor Karan Patel was also one of those who was close to him over the years. In a recent interview with ETime TV, Patel took an indirect dig at Ranaut without actually taking her name asking why she preferred her family members over outsiders to run her production house. He also mentioned how instead of mourning Rajput's demise, few people are trying to use this opportunity to gain mileage and use it to their best ability.

He said, "When a person dies like this, there are people who are nowhere related to him but they jump into it and start creating stories. There are a lot of people. For eg, after whatever happened with Sushant, there were a few people who started talking about nepotism. And just see who has not tried to milk the situation. From Abhinav Kashyap to any other small time actor, everyone has jumped into it. And I see no reason for people to rant about nepotism. For example an actress these days is talking about nepotism. If I am not wrong she came up with her own production house some time back so why didn't she cast Sushant in her film if she's such a big star. She first cast Sonu Sood and then later someone else, so she forgot about Sonu Sood. I have never seen her working with a new director or an actor. Before signing a film, I am sure even she must be asking which banner it is, or who the producer is, or which studio is backing it. So, when even you are running behind big studios then why are you blowing nepotism's trumpet. If you are that big hearted and you have your own production house please go and pick a newcomer, a new director and work with him in his film as the heroine then we will talk and listen to you. You have your own production house and your family members, your sister is taking care of your business, why didn't you hire new people, an outsider and announce job interviews. Why didn't you hire someone who had an MBA degree to look after your production house. I am not saying what she did was wrong (by hiring her family). Today, if my father announces a business obviously he will ask me to look after it. Nepotism is everywhere and it has been going on since ages. I will be shocked if there is no nepotism. It is simple, a person works hard, he earns everything and once he is gone, obviously everything will go to his kids, and not to the neighbours. We need to think then why are we working so hard."

Kangana Ranaut Questions, “Was it a Suicide or a Planned Murder” as ...

Funny29 19 days ago Karan Patel agree with every word.👍

PriyaRai101 28 days ago It's funny how people don't try to understand anything and just jump on to conclusions and share their half baked thoughts just to stay in limelight.

Meena_J 29 days ago LOL, there is nepotism in TV too because Ekta casts her own actors rather than newer comers (or age-appropriate actors) in the recent years like him, Mona Singh, Anita Hassanandani, Rohit Roy, etc.

Bharathi_gurti a month ago Lols he is very superficial as always..doesn't understand what people are trying to tell! These things never go into thier heads! Waste of time...I think kangana will reply him about milking now🤪🤪

pyar-ishk a month ago He need to take that same energy on his role as Mr. Bajaj. Karan is conflicting too many things here, and doesn't seem to understand the cause and movement going on

Eva Green Slams Back at Allegations That She Killed The ...
48 minutes ago