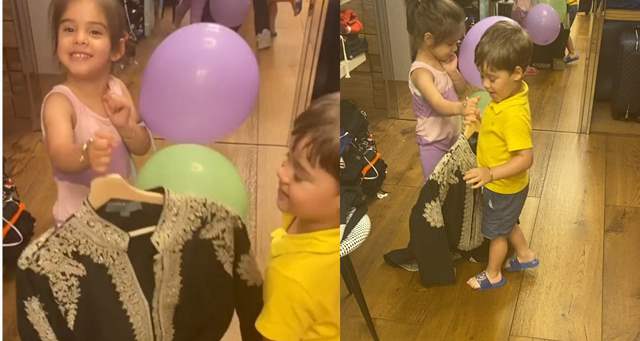 Karan Johar is back with his Quarantine series titled, 'Lockdown with the Johars' featuring his twins, daughter Roohi Johar and son Yash K Johar. The father two, who was on a video sharing spree had taken a brief break from posting his cute banters with his toddlers but this evening he got active on his social media again and shared an adorable video of his babies.

In the brand new video from KJo's grand walk-in closet, Yash and Roohi can be seen roasting their daddy dearest yet again. After mocking and questioning their father's style and accessories, their latest item was his expensive designer kurta that is designed by celebrity designer Manish Malhotra.

In the video, Yash and Roohi can be seen holding a kurta and some balloons. Karan goes on to ask them, "Excuse me, what are you'll holding?" To this Yash and Roohi adorably reply that it's their grandmother's and and say, "Mumma."

Karan breaks into laughter and replies, "This is not Mumma's kurta. This is dada's kurta. Dada's friend Manish Malhotra has made it for me. You think this is Mumma's kurta? No, please don't say that," Karan sulked. He captioned the video, "Now they think I am wearing my mothers clothes!!!! #lockdownwiththejohars #season2 #toodles #weareback."