Kangana Ranaut has yet again slammed the biggies of Bollywood. And this time she has labelled them as late actor, Sushant Singh Rajput's "murderers".

It so happened, that filmmaker Karan Johar shared a video of his twins, Yash K Johar and Roohi Johar on his social media handle.

And Kangana retweeted that video and in her caption she called him SSR's murderer along with slamming him for promoting his kids. 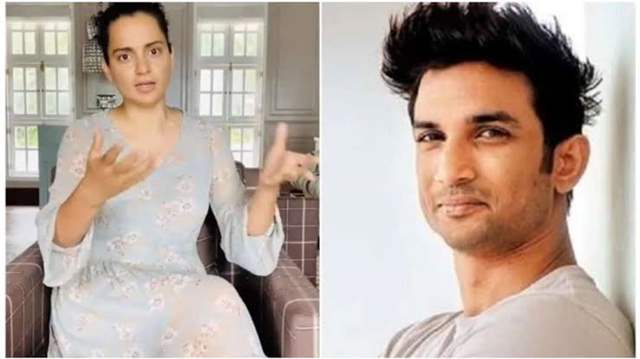 PUMMY5 17 days ago Wow Kangana has finally lost the plot. What She is doing is open Bullying and Harassment of other Actors etc. She is trying to turn people against KJ etc and this is called brain washing and sadly its seen from some of the comments on this site as well. So not everthing that Kangana spits out is true. She never met Sushant or worked with him or offered him any work at all and even said in the early days that he had mental problems. Now She has blamed everyone in the Film Industry for his Murder, the drugs baron, Mumbai Police, Politicians. I wonder who She has left out. This openly calling KJ a Murderer is taking it a bit far now and all because he posted a picture of his kids. I see Law Suits coming out for Slander now. She is stroking up so much hatred that its unbelievable. The only thing that She is ignoring is that Sushant was a lose cannon and worse since his Mother died, she too was suffering from Mental issues and all this has been confirmed by his Doctor. Who will She blame next. I feel a big Lawsuit coming out now, as all She is doing is slandering people to settle scores but because people are not resorting to her level she is getting more angry. Who is left to blame. Apart from the Sushant who ended his life, is made to look like a angle, clearly which he was not.

Different12 18 days ago I understand she has a role in getting the CBI for SSR. I am not a fan of her but nor do I hate her it’s just that calling out people in this level is wrong.

Shopnila 18 days ago Has she totally lost it? Seriously!!! Even I dislike KJo and gang a lot. But, what Kangna is doing is bullying and harassing.

Different12 18 days ago I seriously don’t understand her at all. The entire time Sushant was alive I have never heard her even take his name. Atleast ppl like DP Aalia and Kat appreciates his good work. Wasn’t she the one who initially who said Sushant was depressed and was made to feel like a good for nothing in her initial videos but now why is she calling out and bullying people who just created mental health awareness. Taking a stand is different bullying is different. She has pointed fingers at everyone possible in the industry and put every one down. This is getting so toxic

LoLo 18 days ago You don’t answer a sociopath like her. You let her rave so the whole world can know she’s mad. She never even knew Sushant nor did she so much as mention his name while he was alive. Now she is is voice? She really is deranged. She scares me.

Funny29 18 days ago The woman has completely lost her mind.🤦‍♀️ Hopefully her sister's children will never become actors-actresses, that would be very embarrassing for her. 😅😂 I'm waiting for the day when she is a mother and her child decides to become an actor! What will she tell her child if no one wants to work with her or if no one is watching the movies. 🤔🤨 After all, it is also a star child. 😅

123pritha 18 days ago Well their silence does raise questions?

-SilverAngel- 18 days ago Wow, the level of hate that Kangana harbors inside of her is outrageous. Not until the investigation definitively proves anyone as guilty, she goes ahead and has the audacity to give a verdict against the people 'she' has beef with. I have no appreciation for KJo but everyone has the right to admire and cherish their kids, how can she bully someone for that?