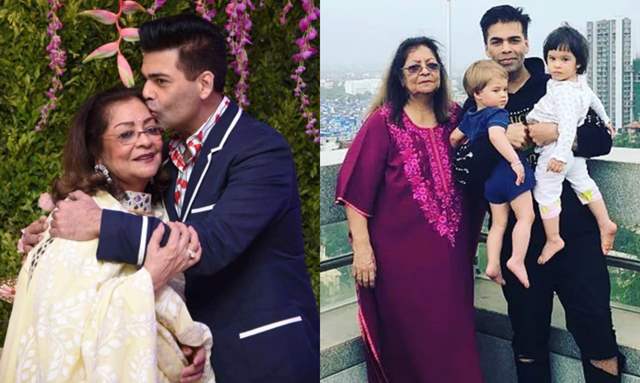 Bollywood filmmaker Karan Johar’s mother Hiroo Johar recently underwent a knee replacement surgery after she had a spinal fusion. The renowned filmmaker took to his Instagram handle on Monday and shared a video of his mother from a hospital in Mumbai after she underwent the operation.

Karan called her a ‘superhero’ in his caption and revealed that she underwent ‘two massive surgeries’ amid the Covid-19 pandemic. In his caption he also informed that his twins - Yash and Roohi, were waiting for their grandmother at home ‘with a cake and a song’.

In his caption, the ‘Student of the Year’ filmmaker wrote: “My Mother … My super hero! She has had two massive surgeries in the lockdown…. In the past 8 months… Her Spinal Fusion Surgery ( the brilliance of DR BHOJRAJ) and her right knee replacement ( the Genius of DR MANIAR ).”

He praised her mother Hiroo for keeping her spirits up both times, “She endured both surgeries with her indomitable spirit and a sense of humour... She is nearly 79 but has the spirit and zest for life as a millennial does! I am so so proud of her… I love you so much Mama! Your babies are waiting at home with a cake and a song!”

On the other hand, the filmmaker will be returning to feature film direction after five years with Rocky Aur Rani Ki Prem Kahani, which he has described as a ‘love story that is deeply embedded in the roots of family’. According to the reports, the upcoming film stars Ranveer Singh, Alia Bhatt, Dharmendra, Shabana Azmi and Jaya Bachchan.