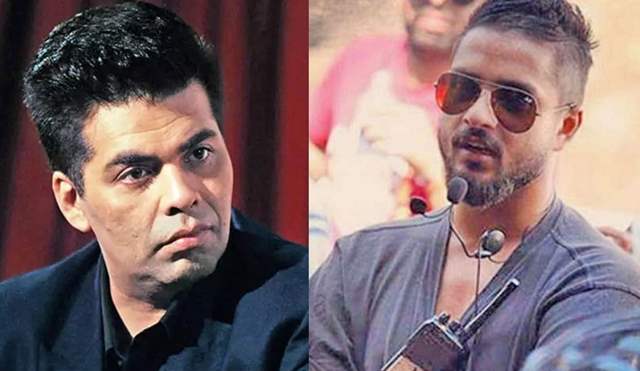 As reported earlier, the Narcotics Control Bureau (NCB) has been currently investigating the drugs angle in late actor Sushant Singh Rajput's death case and recently, they took the former employee of Dharmatic Entertainment, the sister concern of Karan Johar’s Dharma Productions, Kshitij Prasad (who was a part of Dharmatic Entertainment in November 2019) under their custody for further interrogation.

On Friday, Kshitij was called in by the NCB for questioning with regards to the alleged “drugs nexus” in Bollywood and after recording his statements and collecting the required evidences against him, they arrested him on Saturday. And then on Sunday, he was presented before the Mumbai court and that's when he said that the Narcotics Control Bureau (NCB) had forced him to falsely implicate Johar and other executives of the film production company in a case of alleged consumption of drugs.

Now, as per reports in Indian Express, NCB's Deputy DG (South West), Mutha Ashok Jain, has refuted all the allegations made by Kshitij and said that the investigation was being carried out in a “professional manner”.

During NCB's search at Prasad's residence, they recovered a “roll joint that is believed to be the remains of smoked ganja” and seized it. They further told the court on Sunday that according to the statement of another accused in the case, Prasad had made bank and cash payments to the tune of Rs 3,500 each on around a dozen occasions between May and July, for the purchase of ganja.

On the other hand, post Kshitij Prasad (30) was presented at the Mumbai court, his lawyer Satish Maneshinde said that his client – who was produced by video-conference before the metropolitan magistrate – had informed the court that he had been “harassed and blackmailed” by NCB investigators to make a statement.

He further revealed that his client told the court that his statement had been recorded by Sameer Wankhede, in-charge of the Mumbai unit of the NCB, “wherein various patently false claims were inserted despite his (Prasad’s) protests”, and the statement was not recorded as per his narration.

Maneshinde claimed that Prasad was not told whether he was being placed under arrest, nor was he permitted to speak to his lawyer. He was, however, told that he would have to stay the night at the NCB office on Friday as his statement was yet to be completed.

“The NCB officers apart from Sameer Wankhede were courteous to Kshitij and provided him with a comfortable sleeping arrangement. The next morning when his statement recording resumed, Kshitij was categorically informed by Sameer Wankhede in the presence of several other officers, that since he was associated with Dharma Productions, they would let him off if he implicated Karan Johar and some others, falsely alleging that they consumed drugs. Kshitij refused to comply with this despite the pressure being mounted on him as he did not know any of these people personally and did not wish to falsely implicate anyone,” Maneshinde said.

Sameer Wankhede denied the allegations and told Indian Express, “It is routine practice on the part of the accused to make such allegations,

NCB Deputy DG Jain, in his statement told IE, “The investigation is being carried out in a professional manner and there is no intended target other than what is revealed during the investigation. The allegations (by Prasad) are absolutely untrue.”

Seeking Prasad’s custody, the NCB submitted that arrested accused Ankush Arneja had said in his statement that he had supplied hashish to Prasad through accused Sanket Patel on various occasions. Patel, who was arrested and granted bail, has allegedly told the NCB that he delivered 50 grams of ganja to Prasad outside his residence in Andheri around 12 times between May and July this year. The NCB claimed that it had seized the “remains of smoked ganja” and certain documents and gadgets from Prasad’s home. According to the agency, Prasad is “indirectly connected with accused Anuj Keshwani from whom commercial quantity of narcotics was seized”.

“Therefore, it is necessay to interrogate in deep as to whom he was delivering contraband in Bollywood,” the NCB said in its remand application. NCB also told the court that Prasad was not cooperating with the investigation, and sought his custody until October 5.

In his order granting NCB custody until October 3, Metropolitan Magistrate V J Dongre said that due to the serious nature of the offence, detailed custodial interrogation of the accused is “justifiable to reveal the truth”.

Maneshinde said Prasad had told the court that he had been made to sit on the floor with Wankhede putting his shoe near Prasad’s face, which “traumatised” him. Prasad was “extremely fatigued and shaken” after 48 hours in custody, and requested that he be allowed to speak to a lawyer or a member of his family, Maneshinde said.

“Sameer Wankhede informed him (Prasad) that if he wished to be granted a call, he should sign the statement they had prepared which he could retract later,” Maneshinde said. “Kshitij was unaware of the legalities involved and had never even come across this term ‘retraction of statement’. Sameer Wankhede then informed him that if he did not sign the statement, the pressure would continue to mount and he would not be given access to his family or lawyer. At the end of nearly 50 hours of interrogation, humiliation and torment, Kshitij in his desperation to speak to his lawyer or family, unwillingly and under threats signed the statement.”

In a statement released on Saturday, Johar said he does not know Prasad personally, and that he or Dharma Productions cannot “be made responsible for what people do in their personal lives”. So far, 20 have been arrested in the case including actor Rhea Chakraborty.