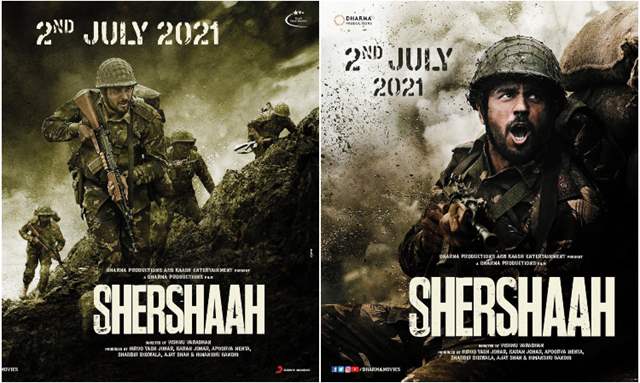 Sidharth Malhotra and Kiara Advani are gearing up for the release of their upcoming film Shershaah. Now, the film’s producer Karan Johar has announced the release date and stated that the film will hit theatres on July 2.

Taking to his social media handle, Karan shared the posters of the film featuring Sidharth as Captain Vikram Batra and penned a short note in the caption.

"The larger than life untold true story of Captain Vikram Batra (PVC) is ready to be unravelled on the big screens. We’re honoured to be showing this journey - #Shershaah in cinemas on 2nd July, 2021, starring Sidharth Malhotra & Kiara Advani. Directed by Vishnu Varadhan," wrote Karan Johar.

During the shoot of their upcoming film, Kiara and Sidharth shared multiple pictures from the sets and it piqued the audience’s interest and fans have been excited about the upcoming film.

Ever since its announcement, the film has been the talk of the town and it is also being speculated that the rumoured couple Sidharth and Kiara also got a chance to bond with each other on the sets of their first film together.

Shershaah is helmed by Vishnu Varadhan and produced by Karan Johar's Dharma Productions. Due to the Pandemic, the release was delayed. However, now the new release date has been announced.