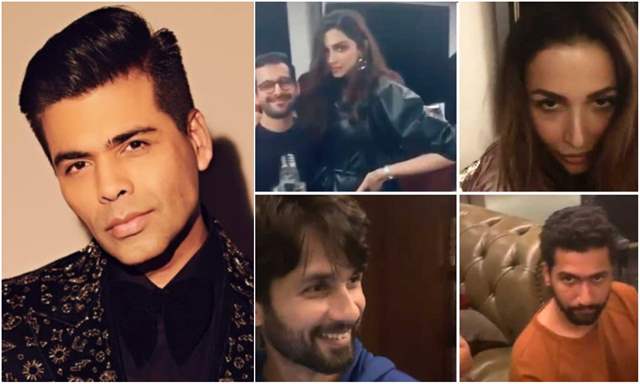 Filmmaker Karan Johar has finally broken his silence against the several allegations levelled against him, his family and his company Dharma Productions.

Ever since actor Sushant Singh Rajput's demise, Karan Johar had come under the scanner as trolls slammed the filmmaker for allegedly promoting nepotism and running camps in Bollywood.

After a drug angle emerged in the Sushant case , the Narcotics Control Bureau took control and started the investigation. The probe by NCB led to a massive disclosure which led to several names of top Bollywood stars cropping up in the alleged drug nexus.

To top it all, the viral party video from 2019, hosted by Karan Johar at his Mumbai residence surfaced again on the Internet and raised many questions. Many claimed it to be a drug party, which was attended by top Bollywood stars including Deepika Padukone, Ranbir Kapoor, Vicky Kaushal, Arjun Kapoor, Malaika Arora, Shahid Kapoor, filmmaker Ayan Mukerji, among others.

Former Delhi MLA Manjinder Singh Sirsa had also filed an FIR with the Narcotics Control Bureau (NCB) against the actors who were seen in the party hosted by Karan Johar at his Mumbai residence back in 2019.

Karan Johar took to his official social media handle to offer clarification over the viral party video and asserted that no narcotics substances were consumed at the party. He also asserted that he does not consume or encourage consumption of such substances.

"Certain news channels, print/ electronic media and social media platform(s) are wrongly and misleadingly reporting that narcotics were consumed at a party that I Karan Johar hosted on July 28, 2019 at my residence.

I had already clarified my position way back in 2019 that the allegations were false.

In view of the current malicious campaign, I am reiterating that the allegations are completely baseless and false. No narcotics substance was consumed in the party. I WOULD LIKE TO UNEQUIVOCALLY ONCE AGAIN STATE THAT I DO NOT CONSUME NARCOTICS AND I DO NOT PROMOTE OR ENCOURAGE CONSUMPTION OF ANY SUCH SUBSTANCE.

All these slanderous and malicious statements, news articles and news clippings have unnecessarily subjected me, my family, and my colleagues, and Dharma Productions, to hatred, contempt and ridicule."

Furthermore, Karan Johar also offered clarification stating that he does not know Kshitij Prasad and Anubhav Chopra personally, and cannot be held responsible for their actions.

For the unaware, the NCB summoned Kshitij Ravi Prasad, who was reported to be an executive producer at Dharma Productions. The NCB conducted raids at his Versova residence and reports mentioned that the agency officers have seized marijuana.

Apart from that, another employee who is Dharma Production’s Assistant Director Anubhav Chopra was also questioned by the NCB today.

In his statement, Karan Johar offered his clarification stating:

"I would like to further state that several media / news channels have been airing news reports that Kshitij Prasad and Anubhav Chopra are my "sides"/ "close aides”. I would like to place on record that I do not know these individuals personally and neither of these two individuals are "aides" or "close aides”. NEITHER I, NOR DHARMA PRODUCTIONS CAN BE MADE RESPONSIBLE FOR WHAT PEOPLE DO IN THEIR PERSONAL LIVES. THESE ALLEGATIONS DO NOT PERTAIN TO DHARMA PRODUCTIONS.

I wish to further state that Mr. Anubhav Chopra is not an employee at Dharma Productions. He was briefly associated with us for only two months in the capacity of 2nd assistant director for a film, between November 2011 and January 2012 and as assistant director for the short film in January 2013. He has thereafter never been associated with Dharma Productions for any other project.

Mr. Kshitij Ravi Prasad joined Dharmatic Entertainment (sister concern of Dharma Productions) in November 2019 as one of the executive producers on contract basis for a project which eventually did not materialise."

To conclude, KJo also mentioned that he will be forced to take legal action if the allegations continue against him.

"However, in the past few days, the media has resorted to distasteful, distorted and false allegations. I hope the members of the media would exercise restraint else I will be left with no option but to legally protect my rights against this baseless attack on me."

Check out his statement here;

Meanwhile, the Narcotics Control Bureau is leaving no stone unturned in probing the alleged drug nexus in Bollywood. Top Bollywood actresses including Deepika Padukone, Sara Ali Khan and Shraddha Kapoor will appear before the agency tomorrow for questioning in the case.