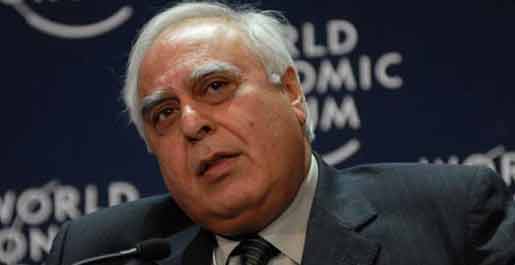 Kapil Sibal along with actor Jimmy Sheirgill and music director Lalit Pandit has announced upcoming socio-political romantic drama "Zainab - A Celebration Of Humanity", for which the former union minister has penned five songs.

The event on Saturday, hosted by TV actor Jay Bhanushali, also featured a dance performance on a Qawwali song written by Sibal. The film's poster was also unveiled at the event.

"Cinema is the most effective way of creating awareness and spreading the social message. Through this film, I'd like to convey the principles of happiness, humanity and harmony," Sibal said.

"Until and unless we change our perception and mentality, no law will be able to bring change in the society. If we want to make our society more compassionate, the psyche of every individual needs to change," Sibal said.

"The film is inspired by several women harassment incidents that took place in Uttar Pradesh between 2011 and now. It's a movie with a political touch and addresses an issue which needs to be discussed in our society," Singh said.

Jimmy said he was initially apprehensive about the film since he hadn't done a politician's role, but eventually he was very happy with the way the movie turned out.

Pandit, who has given music in the film and will also be singing some of the songs, said: "I am experimenting with my sound and introducing new talent. The music is meant for easy listening and yes, I will be singing too."

The plot of the film traces the romantic journey of a Hindu boy and a Muslim girl, Zainab, set against the backdrop of communal riots and political unrest, seen through the eyes of Zainab.

Originating in the small town of Matiyana Buzurg, the story is based on true events pertaining to the chaos in western Uttar Pradesh which began in 2011. Politics is used as a medium to interpret their romance leading to disastrous riots.