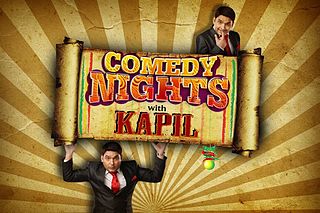 With two episodes of his stand-up comedy show per week and an impending feature film debut looming over his head, comic entertainer Kapil Sharma is currently going through the most hectic time of his life. And now he has a nutritionist accompanying him to all his shootings, as he needs to lose weight for his movie project.

The irregular hours and the erratic schedules have taken their toll on his health.

"My schedules are so jam packed that I just snatch sleep and food whenever I could. But I've decided health comes first. I've got a guy to control my food intake. The trouble is, he feeds me boiled vegetables for dinner."

"But then after that when I'm on my own, I end up cheating and snacking on bread and omelet while shooting. So I'm not losing as much weight as I'd like to," he added.

Fortunately, Kapil's back problem has been taken care of.

"I've been regularly working out and doing back exercises. So the back problem is gone. But nowadays I've a shoulder pain," he said, adding that he is fighting a desperate battle with his schedules.

"I need to create a bank of episodes of my show before I start shooting for my film from May 15. I can't run back-and-forth from the film set to the shooting of the show. They're two completely different disciplines, and I can't allow them to clash.

"Stand-up comedy comes as naturally to me as breathing. But film acting is an entirely new experience for me. I've to give it my hundred percent," said the comedian, who is set to make his film debut with a Yash Raj Films project.

Regrettably, contrary to plans, the channel has refused to cut down the frequency of "Comedy Nights with Kapil" by half.

"The channel says the TRPs will suffer if we cut down the episodes. Luckily, for me I got an unexpected reprieve when the first schedule of my film 'Bank Chor' was shifted from April to May. I am racing against time to create a bank of episodes, so I can complete one schedule of 'Bank Chor' without any interruption," he said.

Kapil says he has no time for himself.

"My mother calls to complain that I don't call her. How do I explain to her that I don't know I whether I am coming or going?"

sharif_lafungi 6 years ago all the best for ur film kapil...comedy nights rocks

PureDrivenSnow 6 years ago Aww poor kapil. Hope the film is a success and hope he is hugely appreciated for it.