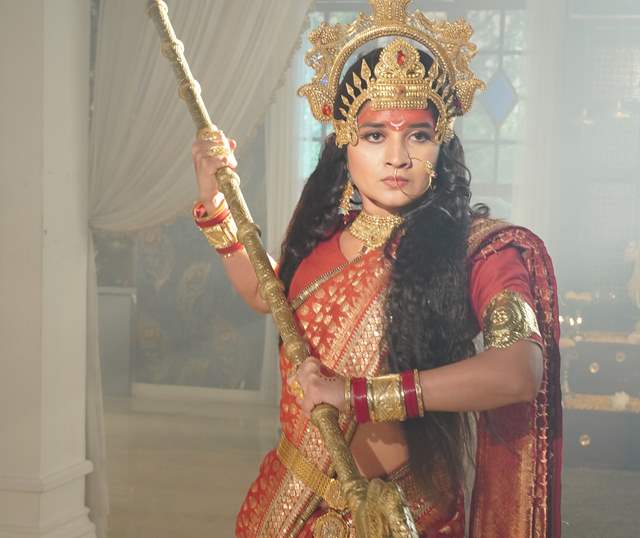 Zee TV’s popular fiction show, Guddan Tumse Na Ho Payega, has received immense love from the audience courtesy its unique and intriguing storyline. Following a 20-year leap that showcased the ups and downs in Choti Guddan’s (Kanika Mann) life, the show has once again brought in a rather captivating twist to its narrative. Choti’s mother aka the original Guddan, who was seen facing a tragic death with Akshat has once again returned to protect her daughter from Pushpa (Anahita Jahanbaksh) and Nia’s (Maera Mishra) evil intentions. In an attempt to do so, she takes the most ferocious avatar which is definitely going to the leave the viewers surprised.

While Kanika as Guddan had once flawlessly brought alive Kali Maa’s avatar in the show to protect Akshat, the actress will now be seen taking Durga Maa’s avatar to do the same for her daughter. Having once portrayed a Goddess’s avatar, Kanika decided to revisit the time and experience to bring back the same magic for this role. Donning a red saree with a golden mukut, the actress was seen drawing all her energy during the shoot to bring out her best for this character.

Talking about her experience, Kanika shared, “I distinctly remember the time when I had to portray an avatar of Kali Maa, I was excited but really nervous too because playing a mythical character has its own challenges and a method to follow. Thankfully, that came out really well and this time too, when I was told to depict Durga Maa, I just decided to keep the same process in mind while bringing out her avatar. While there was no heavy look to depict, unlike Kali Maa, I was required to bring in an immense amount of energy to depict the ferociousness of this avatar. The initial first takes seemed a bit challenging and I had to put myself in a mood that would reflect the anger on my face. However, recalling my earlier experience really helped in essaying this role. I hope our viewers will be delighted at Guddan’s return and will enjoy this episode.”

Appearing as Maa Durga, Pushpa, Nia and Saraswati are convinced that Guddan’s spirit is haunting them and is out to seek revenge against their malicious acts towards Choti Guddan. Will they ever find out the truth about Guddan’s return?

"I am so glad my younger brother is working as a production intern on ...

TV Celebs spook everyone out with their Halloween looks