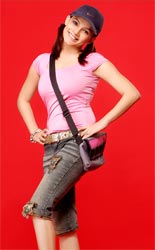 SAB TV's upcoming show Shri Adi Manav, produced by Paritossh Painter, as reported earlier will have many cameo roles while the central characters will be played by Vrijesh Hirjee who plays the blind Shri, while Kiku Sharda plays the deaf Adi and Vishal Kotiyal plays the dumb Manav.

We had earlier reported that talented actress Deepshika will be seen for few episodes. The latest on this is that Kanica Maheshwari, who is presently seen in Star Plus' Raja Ki Aayegi Baraat will be seen in the show for an episode.

According to our source, "Kanica will essay the role of Kiku Shirda's girl friend, and she happens to be the only common friend of all the three central characters, Vrijesh, Kiku and Vishal, from their college days".

The show is expected to launch in early August.

Kanica Maheshwari is also seen presently in Star Plus' Shaurya Aur Suhaani. We tried calling her, but she was not available.

We tried calling Producer Paritossh Painter, but he too remained unavailable..

+ 2
13 years ago She's a good actress!
but she spells her name Kanika or Kanica.. I feel Kanica is a wrong spelling? no? but anyways! Best of Luck to her!

+ 3
13 years ago thanks for article!! she is really good in comic part

13 years ago Thanks TB for the news. Didn't know Kanica was also in Shaurya? Wishing her all the best, she's a good actress!

13 years ago Thanks for the news TB. Kanika is a great actoress and hope she will give her best there also.