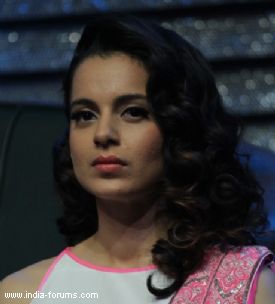 Kangana Ranaut's character Rani from the film "Queen" lacks confidence, but the actress says she relates to the fighting spirit and "never give up" attitude associated with the role.

Directed by Vikas Bahl, "Queen" focuses on a girl named Rani, her journey of growing up as an individual, and how she rediscovers her identity while on a honeymoon alone.

"As a girl, I relate to the character (of Rani) but she has serious issues, like she lacks confidence, she does not have self respect even, if I say. Contrary to her, I have never faced such issues in my life," Kangana told reporters here Friday during the launch of a new TV show "Halla Bol".

"So my character Rani in the film has these issues, but I don't. But I do relate to the kind of fighting spirit she has. She never gives up," she added.

Kangana Ranaut is in Awe of Yogi Adityanath; Applauds his Decision ...