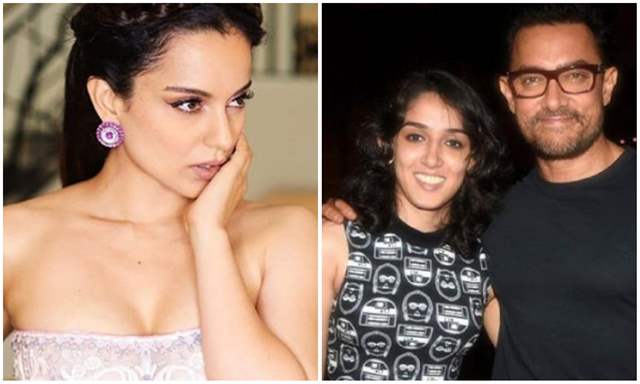 A day ago, on the occasion of World Mental Health Day, Aamir Khan's daughter Ira Khan shared her struggle against depression and revealed that she has been clinically depressed for more than four years now.

Sharing Ira's video, actress Kangana Ranaut has now reacted to the same and even shared her own story of struggle. She tweeted:

“At 16 I was facing physical assault, was single handedly taking care of my sister who was burnt with acid and also facing media wrath, there can be many reasons for depression but it’s generally difficult for broken families children, traditional family system is very important.'

Ira shared a video on her social media where she confessed that she has been depressed for more than four years. “I’ve been to a doctor and I’m clinically depressed. I’m doing much better now. For over a year now, I wanted to do something for mental health, but I wasn’t sure what to do. So, I have decided to take you on a journey, my journey, and see what happens. Hopefully, we will get to know ourselves slightly better, understand mental illness better.”

Ira is Aamir Khan's daughter with first wife Reena Dutta. Khan married Reena Dutta on 18 April 1986 and they have two children Junaid and Ira. In December 2002, Khan filed for divorce and Reena took custody of both children.

Later in 2005, Aamir Khan married Kiran Rao, who had been an assistant director to Ashutosh Gowariker during the filming of Lagaan. The couple announced the birth of their son, Azad Rao Khan through surrogacy in 2011.

Different12 1 months ago Omg!!!! like seriously is there anything in the world that is not about her. Why does she like to make things about her always. This is such a negative and toxic environment