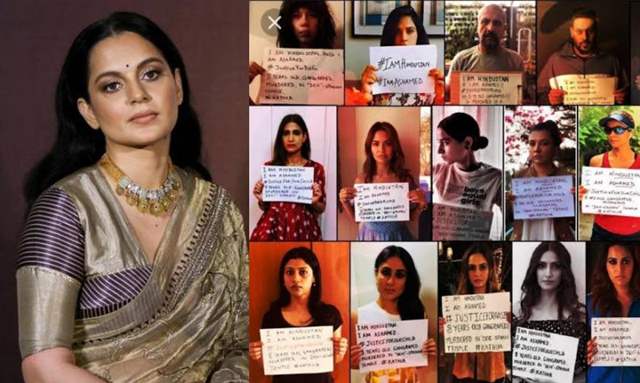 Kangana Ranaut has once again unleashed her wraith at Bollywood actress for their selective activism. The actress took a dig at them by touching upon the topic of women empowerment and claimed how they have been mum about the killing of Nikita Tomar who has was shot in broad daylight.

In her Tweet, Kangana Ranaut expressed her concern over Nikita’s killing as she wrote; “All of them should be put in jail for fake and selective activism, these filmy bimbos have caused huge damage to the cause of woman empowerment, why their mouths are sealed for Nikita who has been shot dead in broad day light by a Jihadi....”

Kangana Ranaut’s tweet comes after a Twitter user questioned Bollywood actors for not standing up for Nikita Tomar’s Murder Case with a placard.

For the uninitiated, the killing of a 21-year-old college student - Nikita Tomar in Haryana’s Faridabad district on Monday sent shockwaves through the country. She was reportedly killed right outside her college in Faridabad’s Ballabhgarh where she had gone for an examination. According to a Times Now report, as the accused and his accomplice have been arrested, investigations have unraveled a new angle to the killing other than ‘love jihad’ as alleged by the family.

This isn’t the first time Kangana has taken a dig at Bollywood celebrities on several occasions. Previously the Queen actress had also criticized celebs for protesting the killing of George Floyd in Minneapolis, US, and taking part in the Black Lives Matter campaign, but preferred to stay mum when two sadhus were lynched in Palghar.

Kangana and sister Rangoli granted Interim Protection from Arrest in ...