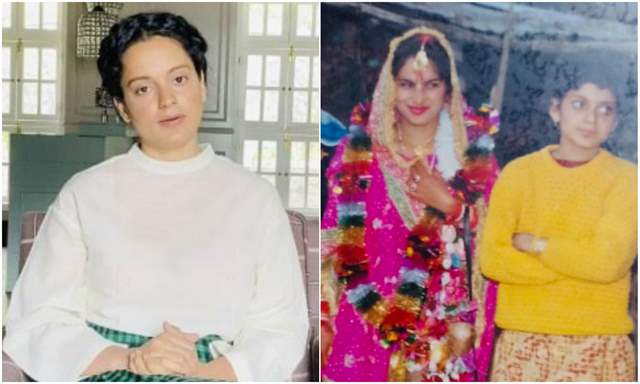 Actress Kangana Ranaut recently made her official entry on Twitter. Her account was earlier handled by her sister Rangoli Chandel.

On Monday, Kangana reacted to being ‘tagged’ in news stories about the atrocities on Dalit community in the country and shared her own story about how her mother dopted a Dalit woman’s daughter and brought her up.

“Dear friends, I see a lot of people tag me in all the news of atrocities inflicted on Dalits and many over smart people who know India only through news mock my take on modern India,sharing the story of my own life n my sister Rajudi the bride in the picture,do read the thread,” she wrote with her post.

Alongside the tweet, Kangana shared pictures from her childhood that show herself along with sister Rangoli and Rajudi at her wedding.

“My mother was newly married she got deeply affected by the plight of a Dalit woman called Mansa in the village who had three daughters but no source of income,against her in-law’s wish she adopted the youngest baby girl named her Rajkumari,sent her to school later to college,” she added in another tweet.

Kangana shared that Raju di grew up with them and she got married at 21. She also shared that this week, Rajudi’s son got married to a Brahmin girl. “This will never be shown in any news,” she said.

The actress shared that her mother had to face criticism by her relatives for adopting Rajudi. The girl would help around the kitchen in the beginning but after objections from their grandmother, she was restricted to serving food.

Kangana said that while she never called her sister Rangoli ‘didi’, her father told them to address Rajudi as ‘didi’. “This is the India I know,” she wrote.

“The atrocities against Dalits you all tag me on I have never experienced but I believe you, but when I share the modern India my mother gave me who are you to call me a liar? Anyway these children look so good together, please bless them,” she said.