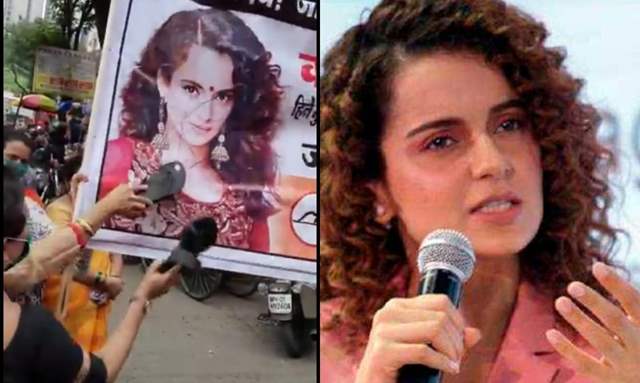 Actress Kangana Ranaut invited trouble over her recent comments. It all started after Shiv Sena leader Sanjay Raut asked her to not come back to Mumbai over her comments against Mumbai Police. To which, the actress had remarked, “Why Mumbai is feeling like Pakistan occupied Kashmir?”

Her remarks have not gone down well with many including Bollywood actors and the Maharashtra Navnirman Sena (MNS), who also issued a warning against defaming Mumbai. But looks like, the outrage may have escalated to a higher level as in a recent video, some women can be seen slapping Kangana Ranaut’s posters with chappals.

In a video shared by TV9 Marathi, a group of women can be seen expressing their displeasure over Kangana’s recent remarks against Mumbai Police and the administration by beating her posters with chappals. Kangana reacted to the video and tweeted:

“After Sushant and Sadhus murder now beating my posters with chappals for my opinions on administration, it seems Mumbai is addicted to blood.”

The rift only intensified after Maharashtra Home Minister Anil Deshmukh on Friday said that Kangana Ranaut has no right to stay in Mumbai and Maharashtra and that strict action can be taken against the actress. "Mumbai Police is compared to Scotland Yard. Some people are trying to target Mumbai Police. An IPS officer has gone to court against this...After, her (#KanganaRanaut's) comparison of Mumbai Police...she has no right to live in Maharashtra or Mumbai" ANI quoted State Minister Anil Deshmukh as saying.

Reacting to the same, Kangana responded: "He is taking his own calls on my democratic rights, from POK to Taliban in one day."

Meanwhile, Bollywood actors like Renuka Sahane, Urmila Matondkar, Sonu Sood, Ritiesh Deshmukh among others have condemned Kangana’s comment through several tweets. The MNS head Ameya Khopkar also warned Kangana and stated that “We will not allow anyone to unjustly criticise the Mumbai Police."

Tippy-top 2 months ago PUMMY5 Lol. She didn't start it first. Sushant's demise started it first. The very first news that came out was that he was banned by 7 big production houses, Shekhar Kapoor tweeted, Raveena did, Mukesh Bhatt did, Kangana too spoke about blinds...etc after that no look back ...a lot of public wrath...Bollywood mafia exposed, Rhea exposed, Mumbai police exposed, Mumbai politicians exposed...then majorly drug mafia exposed...Now people understand it all why Mumbai police and politicians were no supporting Sushant's case. Because of Sushant's death, Bollywood has to face a lot of backlash. Kangana speaking up against bolly bigwigs ..so what...she is doing what they do to her.People supporting Rhea or bollywood mafia know it very well that they are supporting wrong people. This is how life is...the beauty of dark age...

PUMMY5 2 months ago Tippy-top Lol. So in your eyes we should ignore her comment. But she started it and has blamed and damaged the names and reputations of many Actors, Bollywood Film Industry, Drug and Mafia Barons, sank very low to Blame the Mumbai Police, Politicians and called Mumbai etc Pakistan etc. She has seriously lost the plot and does not know when to stop. I am just waiting for Law Suits to start against her. She has damaged reputations etc and needs to be held accountable for her words and actions. Now she wants protection from the very people that she has insulted.

Rosalinesak 2 months ago Not understanding the furore on such negligible comment by Kangana. Anyone will react in the same way if they were asked to not return to a particular place.

Tippy-top 2 months ago An Indian girl was killed in Canada, her father was saying, now we hate Canada. If she gets threats, she can easily feel like that as if living in POK. If each and every person living in Mumbai gets threat from Sanjay politician, each person will feel suffocate and can feel what ever place they live in like a total hell even if it gives you a lot of fame. If you suffocate a person, such things can look like POK. This sentence of Kangana can be easily ignored but people are reacting.