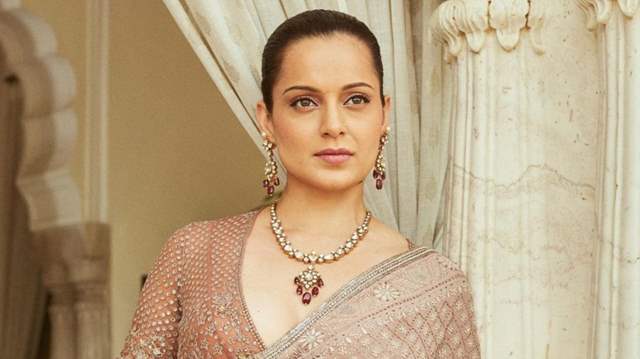 Kangana Ranaut is one of the Bollywood actresses who uses social media as a weapon to express her thoughts and herself. Be it the BTS pictures from her sets, her views and opinions regarding various subjects or pictures with family pictures, she puts it all out there on her social media handle.

Currently the actress is busy filming for her upcoming project 'Emergency'. She has been constantly keeping her fans updated regarding the smallest detail related to the filming of the movie, but today it seems like Ranaut has taken a break day from her shooting.

Today, Kangana took to her Instagram and shared a post with two pictures of hers. The first one is a closeup shot of hers sporting her look from 'Emergency' and in the 2nd one she is looking stunning in a ink dress flaunting her natural beauty. Along with this post she also penned a cryptic note about work and how a character always stays within an actor.

Her note read, "Today is a break day, I don’t call it a break I call it a pause day….On such a blank beat you wonder where did you loose yourself….. You dissolve in the character and find that nothing of you is left in you. You see your own pictures like a stranger and wonder will you ever be the same ….. the truth is you can never go back to being the same person, once a character has happened to you it remains like a scar on the soul, like the darkness of the night, like the glow of the moon, like a realisation you can’t own, like a million shinning suns, like the dizzying hights of the mountains and suffocating depths of the sea….. a character will remain regardless of you … #emergency".

Kangana will portray the late Indira Gandhi in her upcoming film Emergency, which also stars Anupam Kher as J P Narayan, Mahima Chaudhry as Pupul Jayakar, Shreyas Talpade as Atal Bihari Vajpayee, and Milind Soman as Field Marshal Sam Manekshaw. Kangana wrote and helmed the movie Emergency. Kangana has produced the films as well along with  Renu Pitti  Ritesh Shah wrote the dialogue and the screenplay.